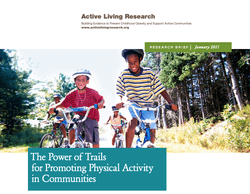 Trails are commonly used for physical activity. A study conducted in the United States in 2006 indicated that about one-quarter of adult men and women used a walking, hiking or bicycling trail at least once per week.

Currently, no data are available on trail use by children and adolescents. However, another U.S. study, also conducted in 2006, showed that the percentage of park area close to homes, such as spaces that included nature trails and bicycle paths, was associated with higher levels of physical activity among young children.

The Rails to Trails Conservancy estimates that the United States has 19,000 miles of rail-trails—trails built along former rail lines—and more than 1,100 trail projects under development.

Trails help connect people of all ages to the places they live, work and play, and they provide an ideal setting for walking, bicycling and other modes of recreational physical activity and active transportation. Community trails are diverse in character and may include paved and unpaved trails, rail-trails, short circular walking paths around schools and workplaces, and trails within parks.

We are an interdisciplinary team with internationally-recognized expertise and deep connections in public health, transportation, planning, parks & recreation, school activity programs, behavioral science, and obesity prevention. Our goal is to support, share and put into practice research that can promote daily physical activity for children and families across the world. Since 2001, ALR has been at the forefront of building evidence on how to create communities that increase opportunities for physical activity. We have learned that communities designed for activity are better for health, economic vitality, and environmental sustainability.