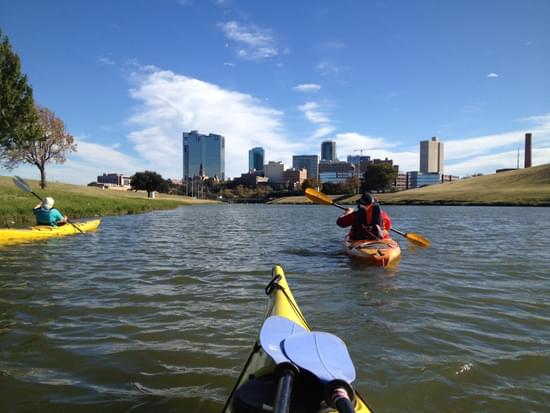 The Trinity River Paddling Trail consists of 130 miles of river accessed by 21 official launch sites. The paddling trail traverses 9 municipalities including Dallas and Ft. Worth, and is located in the middle of America’s 4th largest metro area with a population of 7.5 million people. Over 5 million people live within 30 minute drive of the trail, and millions more visit the Dallas-Fort Worth (DFW) area every year. This water trail has huge potential for making the DFW area a destination for paddling tourism.

Over the years, the cities on the banks of the Trinity River have built a number of amenities accessed by the river. Currently there are 5 learning centers, over 50 Parks and preserves, and many miles of paved hike/bike trails adjacent to the paddling trail.

The Trinity River is a major water source for the state of Texas, with approximately half of all the state’s residents receiving their drinking water from the river. The paddling trail incorporates 3 major tributaries of the river, including the Clear Fork, West Fork and Elm Fork. The final 40 miles of the trail are the start of the river’s Main Branch, which begins on the southern edge of Dallas’ central business district, and then exits Dallas County’s southern boundary on the way to the Gulf of Mexico at Galveston Bay.

Throughout history the Trinity River has been a significant part of the life of this part of America’s southwest. Native Americans built settlements on the river banks, as evidenced by a 3,000 year old spearhead recently found near the river by a student on a field trip organized by one of the learning centers. President Sam Houston camped on the river bank at Big Spring while he was negotiating a landmark treaty with the Native Americans in the 1840’s. The California Crossing canoe launch site that is part of the paddling trail is named for the section of the river crossed by the 49ers on their way west to California in the gold rush.

As the Trinity River Paddling Trail receives more attention as part of the National Park Service’s Recreation Trail System, usage is expected to significantly increase, and more launch sites are expected to be built. Eventually the paddling trail may even be extended the remaining 375 miles from its current end all the way to the Gulf of Mexico.”

Over the last few years Dallas has focused on the underserved communities, which is primarily southern Dallas. Along with Dallas the Trinity Coalition’s mission is to include the people of southern Dallas and southern Dallas County, all underserved communities, in participating in their paddling trail. Southern Dallas and Southern Dallas County are the start of the Great Trinity Forest, the largest urban hardwood forest in America. The city has created a natural preserve around some natural springs in southern Dallas. The Trinity Coalition and the Army Corps of Engineer, working with the city of Dallas, have opened several recreational activities, including hiking and biking trails. Please see: http://dallastrinitytrails.blogspot.com/2013/09/natural-springs-in-dallas-radiocarbon.html

Thank you to the Trinity River Paddling Trail Team for sharing the information for this article.