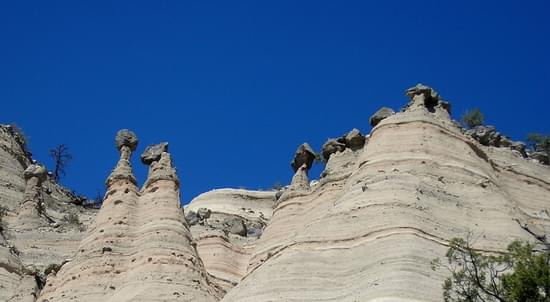 The two-mile Tent Rocks National Recreation Trail is managed by the Bureau of Land Management from the Albuquerque Field Office. Located in Kasha-Katuwe Tent Rocks National Monument, the trail is located 40 miles southwest of Santa Fe and 50 miles north of Albuquerque, New Mexico, with the most direct access from Interstate 25. The trail features a close view of these intriguing natural features.

Located on the Pajarito Plateau in north-central New Mexico, the Monument is a remarkable outdoor laboratory, offering an opportunity to observe, study, and experience the geologic processes that shape natural landscapes.The elevation of the national monument ranges from 5,570 feet to 6,760 feet above sea level. The cone-shaped tent rock formations are the products of volcanic eruptions that occurred 6 to 7 million years ago and left pumice, ash, and tuff deposits over 1,000 feet thick. Tremendous explosions from the Jemez volcanic field spewed pyroclasts (rock fragments), while searing hot gases blasted. 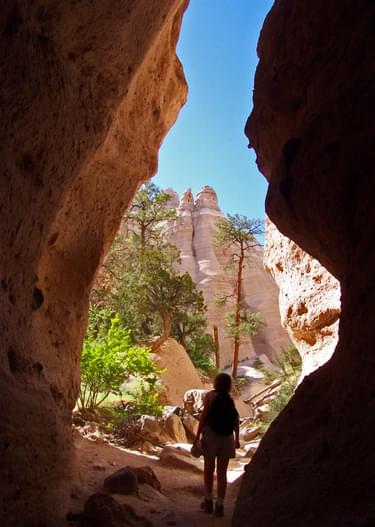 Hiker reaches the end of the slot on Tent Rocks Trail; photo by Stephen Ausherman

The Pueblo de Cochiti tribe has always considered this area a significant place. "Kasha-Katuwe" means "white cliffs" in the traditional Keresan language of the pueblo. Under the BLM's administration, these lands were designated as an Area of Critical Environmental Concern and contain a the Tent Rocks Trail, which has been designated a National Recreational Trail. On January 17, 2001, Kasha-Katuwe Tent Rocks was designated a national monument.

The complex landscape and spectacular geologic scenery of the national monument has been a focal point for visitors for centuries.Surveys have recorded many archaeological sites reflecting human occupation spanning 4,000 years. During the 14th and 15th centuries, several large ancestral pueblos were established and their descendants, the Pueblo de Cochiti, still inhabit the surrounding area.

In the midst of the formations, clinging to the cracks and crevices high on the cliff face, the vibrant green leaves and red bark of the manzanita shrub stand in sharp contrast to the muted colors of the rocks. A hardy evergreen, the manzanita produces a pinkish-white flower in the spring that adds to the plant's luster. Manzanita was used for medicinal purposes by Native Americans. The ponderosa pine and pi–on-juniper woodlands provide habitat for big game and nongame animals. Elk, mule deer, and wild turkey frequent the higher elevations. Coyotes, chipmunks, rabbits, and ground squirrels are common residents.