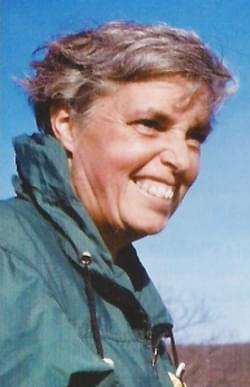 Butch Henley on the trail; photo by Reese Lukei

Susan “Butch” Henley became a Girl Scout Leader in 1961, sharing her love of the out-of-doors with Girl and Boy Scouts while training their leaders in camp skills.Butch volunteered for the American Red Cross, teaching canoe, kayak, and water safety skills. She was a long-time resident and volunteer of the Bull Run Mountain Community in Haymarket, Virginia. Her children reared, she pursued her dream to backpack the Appalachian Trail.

In 1978, at the age of 46, “Butch” completed the 2,180 mile AT, taking nine months to accomplish the hike from Georgia to Maine. Upon her return, she read an announcement in Backpacker Magazine about Hik-a-Nation, an effort developed by the American Hiking Society. The 4,147 mile trek from the Pacific to the Atlantic took 13 months, April 1980 thru May 1981 to walk, started with over 100 hikers and finished with 35, Butch among them.

Still adventurous, but with worn out knees, in 1985, Butch took up bicycling with some trail friends and rode from Washington State to Florida. She would joke everything was fine until she fell off, then using the bike for support she walked until meeting someone to help her back onto the bike. Never idle, Butch began swimming competitively with the Virginia Master’s Swim Team of U.S. Master’s Swimming, keeping her physically and socially active.

After serving on the Board of the American Hiking Society (AHS), Butch became the Administrative Director of AHS, and ended her career working for the American Discovery Trail Society in 2009. In these capacities, she often visited the halls of Congress to lobby for trails throughout the USA. Eventually most of the Hik-A-Nation route developed into a national trail now known as The American Discovery Trail. These efforts earned her numerous awards, including the establishment of one in her name by the AHS honoring dedicated trails professionals, and the ADT’s Happy Feet Award.

Hikers and trail lovers celebrated her life on National Trails Day in June 2014.

Donations in Butch's honor may go to an effort of the donor’s choice regarding research and support of those with brain disease, trail development and maintenance, Scouting, or Hospice and Palliative Care.