Studying impacts of visitor use on the Appalachian Trail

Visitor use impacts associated with the Appalachian Trail include use of the footpath itself, overnight use areas (both designated and bootleg), and human waste management. 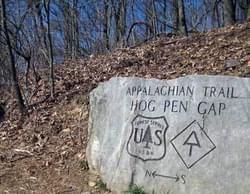 Although the Appalachian Trail still provides visitors with the illusion that they are in a remote area, more often than not they have lots of company. Several million people set foot on the Appalachian Trail each year– most for just a few miles, but some who hike for weeks or months, and hundreds or thousands of miles at a time. The impacts associated with this level of visitor use are a significant challenge for managers. Not only are there direct impacts to soils, vegetation, water, and wildlife: there are impacts to other visitors as well.

Most of these impacts are concentrated into a relatively small area consisting of the AT footpath itself, which is 2,175 miles long and averages about 24 inches in width, 160 miles of side trails of the same average width, 324 shelter or designated overnight use sites with an average size of one-half acre, and more than 4,000 dispersed campsites and scenic overlooks.

The environmental impacts associated with this level of visitor use are, to a certain extent, unavoidable. The challenge for managers is to avoid those impacts that are non-essential (such as campers felling trees or collecting live wood for firewood) and minimize those impacts that are unavoidable (such as trampling and soil compaction along the AT footpath). The footpath itself is the primary recreational feature of this unusual park unit. Averaging twenty-four inches in width, it sustains most of the impact of AT visitors. Managers strive to create and maintain a footpath that provides visitors with a challenging experience while balancing the need to ensure reasonably safe conditions for visitors and minimize impacts to physical resources. Many sections of the Appalachian Trail are exceptionally uneven and primitive, with rocks, roots, and other obstacles creating frequent grade variations or obstacles. Some sections of the AT also traverse through highly developed settings, and may include boardwalks, handrails, and a uniform, firm, and stable surface. However, although significant variation occurs throughout the length of the Appalachian Trail, most of the AT is designed with an open and obvious tread, native surfacing, bridges, rock steps, and other structures as necessary for resource protection, and directional and interpretive signs. AT managers need accurate data on trail conditions to monitor trends and direct trail maintenance efforts.

In addition to these quantifiable impacts, there are also impacts that are difficult to determine direct causal relationships for or quantify. “Unsurfaced trail treads are susceptible to a variety of trail impacts. Common impacts include vegetation loss and compositional changes, soil compaction, erosion, and muddiness, exposure of plant roots, trail-widening, and the proliferation of visitor-created side trails. Trails, and the presence of visitors, also impact wildlife, fragment wildlife habitat, and cause avoidance behavior in some animals and attraction behavior in others to obtain human food” (Marion & Leung, 2001). The National Park Service’s Facility Management Software System (FMSS) also provides a database tool that is used to record the condition of the trail and identify trail maintenance needs. As of July 2005, 20% of the AT footpath has been assessed, using a random sampling methodology. The extrapolated results indicate that 43% of the trail footpath is in good condition; 32% is in fair condition, and 26% is in poor condition. No parts of the trail inventoried to date were listed as being in serious condition (Table 9.1).

Appalachian Trail managers employ a variety of strategies to minimize the impacts of visitor use. Appropriate trail design, construction and maintenance are perhaps the most effective tools available to AT managers. By avoiding steep grades, poor soils, and sensitive resource areas, AT managers can substantially limit visitor impacts (Birchard and Proudman, 2000). Other strategies include “hardening” of the existing trail footpath and structural features, limiting use in certain areas, and deployment of “ridgerunners” and “caretakers” to monitor use and encourage visitors to practice “Leave No Trace” principles to minimize their impacts on AT resources.

Appalachian Trail managers also can employ regulatory or policy guidelines to concentrate use in areas that can withstand heavy use, disperse visitors in areas that can withstand limited levels of use, and restrict or prohibit visitors from entering areas where visitor impacts are unacceptable. Research on trampling impacts has shown that the majority of resource impacts associated with trail use occur with initial or low levels of use. Furthermore, substantial increases in visitation on moderate-use trails and campsites generally yield relatively small additional amounts of impact. The implications of these findings for managers are, in a nutshell: impacts can be minimized most effectively by focusing visitor use on a limited number of trails that have been designed and maintained to sustain high levels of use. Dispersing use or limiting use to control impacts is generally ineffective, except at very low levels of use (Leung & Marion 2000).

In 1999, 2000, and 2001, Marion, the Appalachian Trail Conservancy, and local Trail Club and agency partner managers conducted a study of 17 overnight use sites that were known to receive heavy overnight visitation resulting in significant resource or social impacts (Marion 2003). In that study, researchers analyzed and documented conditions at these 11 shelters and 6 camping areas, and then proposed and implemented management recommendations at several locations intended to reduce visitor impacts to soils, vegetation, and other resources. Further monitoring is needed to confirm the effectiveness of these measures, but initial observations indicate that the measures have significantly reduced visitor impacts at these sites. However, visitor impacts at designated overnight use areas may be a comparatively small part of the problem.

According to the Appalachian Trail Conservancy, most overnight visitors stayed in huts and shelters three decades ago. A recent survey of AT visitors found that 56% of the overnight visitors stayed in huts and shelters; but 12% camped near shelters, 23% stayed at designated campsites or tent sites, and 9% camped elsewhere along the AT (Manning et al, 2000). The 9% of visitors who camped at “bootleg” sites along the Appalachian Trail have the potential to cause the most significant damage to AT resource values. Most shelter sites along the AT have been in existence for decades. Research by Marion and others indicates that impacts to vegetation and soils associated with use of these established sites are probably well established, and that further incremental impacts are relatively small. Further, impacts associated with construction of any new shelter or overnight use sites are analyzed in environmental analyses prior to construction and mitigating measures are incorporated into the project design to ensure that no significant resources are affected.

By contrast, unregulated sites are usually created by visitors in new areas without advance knowledge of potential adverse impacts, and are often created near areas that have vulnerable natural resources, such as streams, lakes, springs, and rock outcrops. Even infrequent use of these “bootleg” campsites can quickly damage soils and vegetation, as well as any rare plant or animal species that may be present. In 1999, the Appalachian Mountain Club, the Appalachian Trail Conservancy, and the White Mountain National Forest collaborated on a study titled “An Inventory of Bootleg Campsites on the Appalachian Trail in the White Mountain National Forest” (Kahdahl 1999, unpublished). The study documented conditions at 402 unauthorized bootleg sites that were identified along a 131.7-mile section of the Appalachian Trail between Grafton Notch, Maine, and Glencliff, New Hampshire.

Most of the sites were relatively small, but 17 sites were greater than 1,000 square feet. The total area of disturbance was 107,887 square feet, or an average of 268 square feet per site. In general, the most severe impacts were associated with sites located near water sources or at high elevations, where fragile soils and vegetation were affected.

Human waste management has been another perennial challenge for Appalachian Trail managers. In some instances, poor sanitation management has led to direct and indirect contamination of water sources. Increased attention to this issue by AT managers during the last decade has resulted in substantial improvements. Sanitation options range from user-made cat-holes to standard pit privies to composting privies. Currently, there are 265 constructed privies along the AT: 31 hot composting privies (bin-style), 39 cool composting privies (above-ground mouldering style), 186 pit privies, and 9 vault toilets that require pumping.

In 2004, Appalachian Trail managers initiated an evaluation of sanitation facilities as part of the trailwide condition assessment. Of the 96 sanitation facilities that have been assessed to date, eight have been deemed to be in need of relocation or repair. However, these studies have focused primarily on structural needs, not on the potential effects of pathogen migration on water quality and other resource values.

Several AT managers have stated that a baseline study of sanitation facilities and their potential effects may be the most important need in terms of assessing current visitor use (Sommerville, Proudman, personal communication 2005). The best currently available information is contained in the Backcountry Sanitation Manual (Appalachian Trail Conference and Green Mountain Club 2002), which provides guidance on the design and location of backcountry sanitation systems and includes personal observations on the effectiveness of sanitation systems at several high-use sites along the Appalachian Trail.

In summary, no studies of visitor impacts on natural or cultural resources have ever been conducted on a trailwide scale. The Appalachian Trail Conservancy is currently assessing the condition of the trail footpath, shelters, campsites, and sanitation facilities through the application of the National Park Service’s FMSS process. Once completed, this data should provide a baseline for measuring visitor impacts on those facilities as part of documenting over-all maintenance needs. Further research will be needed to quantify impacts to water, air, soils, and wildlife. In the interim, inferences can be made from several studies that have measured visitor impacts along certain sections of the Appalachian Trail, such as the sections of the AT that pass through Great Smoky Mountains National Park in North Carolina and Tennessee and the White Mountains in New Hampshire. Soil erosion, campsite proliferation, and adverse effects of poor sanitation appear to be the most significant challenges facing AT managers.

Because of its geographic expanse, generally wet and cold environment, relative ease of access and high use levels, the Appalachian Trail provides an ideal laboratory for experimental design of trails, overnight use areas, and backcountry sanitation facilities. Strong anecdotal references indicate that trail hardening, Leave No Trace training, and ridgerunner and caretaker programs have had positive effects in reducing the impacts of visitors on Appalachian Trail resource values. Other programs directed at reducing visitor impacts, particularly programs focused on improving sanitation and reducing adverse impacts to water quality, could have similar positive benefits.