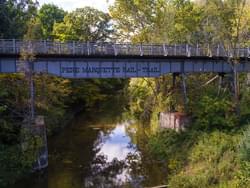 The main purpose of studying nearby businesses and adjacent residential landowners was to better understand the level of support for the extension of the Pere Marquette Rail-Trail prior to its construction. Further, it was to establish a baseline against which to assess support for the trail after construction and once operating. Another purpose was to begin to understand how, when and why individuals and families who have relatively easy access to the trail might use the linear park.

Toward that end, a census of all adjacent residents and nearby businesses to the corridor where the rail-trail will be constructed were mailed a questionnaire. Surveying occurred in April and May of 2000. Businesses were mailed a four-page questionnaire and residents an eight-page questionnaire. Businesses and residents also received a personalized letter and business reply envelope with the survey. Reminder postcards and a second mailing of the survey were also used to garner a strong response. Six of the nine businesses (67%) and 26 of the 42 residential landowners (62%) responded.

Non commercial residents living adjacent to the rail-trail were primarily single-family homes and family owned agricultural land. On average, residential houses were 394 yards from the trail. Sixty percent of the residents will have a full view of the trail, 24 percent will have a partial view, and 16 percent won't be able to see the trail from their house with trees leafed out. Residents lived on average 32 years in this location and 80 percent purchased their property when the railroad was operating. Fifty percent of the residents were retired and 75 percent of the households did not have children. The most common (42%) pre-tax income bracket for residents was between $20,000 and $40,000.

All the businesses knew about the upcoming trail, while 92% of the residents did. The top information source for initially learning about the trail was word-of-mouth for both businesses and residents, followed by the newspaper and township newsletter. No business or resident indicated that a park and recreation commission meeting or another public meeting introduced them to the trail.

Half of the businesses have attended meetings about the rail-trail and one businesses was involved in the fund raising effort. One resident was involved as a township representative at trail-related meetings and two residents were once members of the Pere Marquette Rail-Trail Friends organization. Once the trail is built, residents expressed they are only slightly interested in volunteering and would be most willing to help with birdhouses along the trail or at an annual cleanup day.

Five of the 26 residents who responded to the survey have used the Midland County portion of the Pere Marquette Rail-Trail and only one resident had used another rail-trail in the state of Michigan. Businesses estimated that their employees would be most likely to use the trail after work, rather than before work or during breaks.

At the time this survey was completed, businesses were more supportive of the new trail than residents. Businesses, however, are concerned about the safety of trail users and any potential liability at driveway crossings. Residents were "neutral" in their support for the rail-trail in Isabella County, however, a majority of the residents were "very supportive" that the trail was being designated as nonmotorized use only. Residents segmented into three levels of support: supportive and viewed the trail as a positive place for children to recreate, neutral, or unsupportive and would rather have the land under their family's control.

The extension of the Pere Marquette Rail-Trail through the northwest corner of Isabella County is designed to provide recreation opportunities for county residents and visitors. Based on this census of adjacent residents and nearby businesses, it has also engendered a wide variety of public opinion. These opinions range from strongly supportive of the concept, construction and implementation of the trail to opposed to it at all phases.

Among businesses there is more support or neutrality than opposition. Concerns focus primarily on safety of trail users and concerns about liability for businesses at driveway crossings. Support focuses on the trail being a community improvement and attracting visitors to the local area. For adjacent residents, three distinct groups of opinions are evident. A third see the trail as an improvement over the existing abandoned industrial corridor. They see the recreational opportunity, especially for neighborhood children, as positive and the trail as aesthetically pleasing. Another third, who were neutral, expressed few opinions. A final third were negative.

They had distinct opinions and concerns. They were historical concerns about wanting the land in their private ownership, land which had been in their family's ownership prior to the railroad. Others were concerned about the potential for litter, trespass and safety of their person or property. Finally, there were aesthetic concerns about changes in the landscape (cutting of trees) or seeing people where they previously saw none.

It is important for Isabella County to address these concerns. We are recommending that the questions posed by respondents be addressed by a variety of means. These may include newspaper articles, personalized letters, an educational flyer, informing key "information sharers" to improve word-of-mouth communication and the township newsletter. As construction dates become more definite, residents and businesses should be notified about activities related to the rail-trail.

The County and Friends of the Pere Marquette Rail-Trail can also begin to think about volunteer programs. The results of this study suggest that putting up bird houses might be the most successful in terms of resident involvement. After the trail is constructed, efforts should be made to encourage residents, employees of local businesses, and visitors to use the trail. Messages that promote enjoying nature, health benefits and relaxation would be positive for motivating adjacent residents. Over time, the goal would be that a majority of the adjacent residents and businesses would be strong supporters, users and stewards of the rail-trail.