The trail runs along the Spokane River for 37 miles from the Idaho state line to Nine Mile Falls, Washington. The paved trail is used both for commuting to work and for recreation. 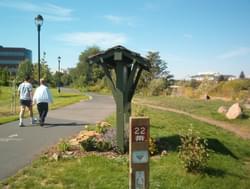 The Spokane Centennial Trail comprises 37 miles of natural beauty following the historic Spokane River from the Idaho state line to Nine Mile Falls, WA. The Trail has something for everyone. Walk or run, bike or in-line skate, or simply enjoy nature. Picnic on the river’s edge, launch a canoe, or just sit and contemplate the rhythmic flow of the river. Designed for use by people of all ages and physical capabilities, the Trail is fully paved, so it is ADA accessible. It is used for commuting to both work and pleasure, and wildlife observation.

With its metropolitan center section in downtown Spokane, the Centennial Trail branches out to more rural west and east endpoints, reaching into Idaho, for a total of 61 miles. It mostly follows the contours of the Spokane River and joins up with Lake Coeur d’Alene, Idaho, connecting along the way with the Liberty Lake Trail, Plantes Ferry Link Trail, and Cheney-Fish Lake Trail.

There are over 2 million uses per year on the Trail. It is not only a free resource for the community, but a destination location. The Trail provides a great venue for family events, youth involvement such as school planting projects and Boy Scouts helping with the annual Unveil the Trail clean up, and fundraising by nonprofit groups. 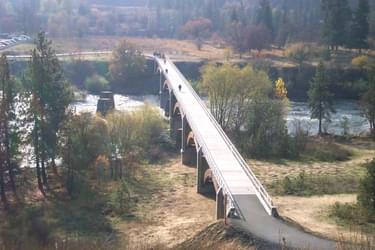 In 1979, Spokane County Parks proposed a bicycle/pedestrian pathway along the Spokane River. In 1984, the Spokane Valley Chamber of Commerce formed a Parks and Recreation Committee to explore this recreational possibility. In 1986, this group proposed a 10.5-mile recreational trail in the valley, naming it a Centennial Trail to coincide with Washington State’s 100th birthday in 1989. In 1987, the internationally recognized architectural team, Jones & Jones, was selected to develop a master plan for the Centennial Trail.

It took a community to build the trail system - fundraisers, volunteers, and local businesses. In 1991, the Friends of the Centennial Trail was created, a nonprofit Washington corporation, dedicated to the ongoing support of the public sector for the development, operation, maintenance, and enhancement of the Spokane Centennial Trail.

With the cooperation of the entire community, roughly 30 miles of class 1 trail were completed by 1992. The remaining seven miles consists of class 2 and 3 trail to create a contiguous trail system. The Trail is maintained via a cooperative agreement between the Washington State Parks & Recreation Commission and the city and county parks departments and assisted by the Friends of the Centennial Trail. 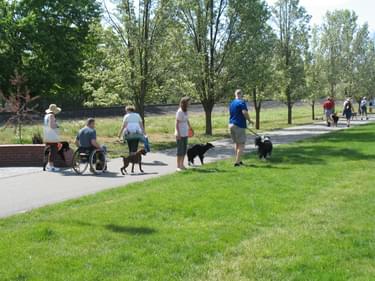 Tails on the Trail; photo by Chris Guidotti

To help raise funds to maintain the Trail, an Adopt a Mile program was created, as was a Miracle Mile program with donors’ names on medallions on the Trail. The Trail includes the Spokane House Interpretive Center and historical interpretative kiosks and statues.

Non-motorized vehicles only (exception: wheelchairs) Trail hours: dawn to dusk, year-round No alcoholic beverages or firearms on the Trail Speed limit: 15 m.p.h. maximum Pets must be under control and on a six foot or shorter leash at all times Pack it in... Pack it out!

Along the Spokane River starting at the State Line of Idaho off of I-90, exit 299. The Trail then runs mostly by the river for 37 miles to Nine Mile Falls, WA. There are many access points to get on the trail and 14 trailheads.

Friends of the Centennial Trail