Trail partnerships and community support have made this a successful and popular trail. 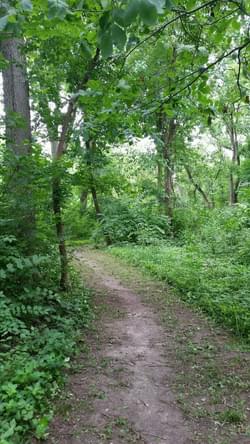 The uniqueness of Smith's Island Nature Trail lies not only in the ecosystem and species present, but also in the historical significance of the island. Smith's Island's close proximity to Locks and Dam 14 minimizes the flooding effects of the Mississippi River, resulting in an ecosystem with species found in more upland communities. Sugar maple, oaks, hickories, and walnuts are the dominant tree species. In the spring, woodland wildflowers abound to include bloodroot, columbine, trillium, may apple, Dutchman's breeches, and spring beauty.

Smith's Island is also a bird lover's paradise year round; from the wintering American bald eagles, herons, and gulls to the migrating osprey, pelicans & terns, to numerous song birds, waterfowl, and raptors.

Smith's Island Nature Trail serves a broad and diverse population base for a metropolitan area of approximately 400,000. In addition, users are drawn from the adjacent scenic Great River Road and the proposed national Mississippi River Trail (bike). The trail is located approximately one mile off Interstate 80 offering travelers a break from their journeys.

Smith's Island also serves as an interpretive focal point for the region. Numerous natural history programs are conducted on the site for various schools and clubs. Special events are held annually such as an Eco-Meet where fifth graders from approximately twenty schools attend lectures on various nature and water safety subjects and are then tested on their knowledge. Annually, bald eagle watches are held, attracting thousands from throughout the Midwest.

Facilities and amenities adjacent to Smith's Island include picnic shelters and restroom facilities. Additional interpretive exhibits include a prairie demonstration plot and historical displays (to be installed later this year).

Smiths Island is a unique natural and historical area that has been enjoyed by Quad Citians throughout the years. Once owned by a farmer, John Hoepfner, Smith's Island is now owned and managed by the U.S. Army Corps of Engineers. Mr. Hoepfner not only farmed the island but also sold recreational and residential lots. Individuals from all walks of life shared an appreciation of the Great Mississippi River and came to spend their leisure time on the island. Supplies, people, and Mr. Hoepfner's horse drawn buggy could be transported to the Iowa shoreline using a hand pulled ferry. During the winter many families could earn extra money to sustain themselves by cutting blocks of ice. The ice was stored directly across from Smith's Island and used for home refrigeration.

Today Smith's Island looks much different than it did before the Nine Foot Channel Project flooded a large portion of its low lying areas. Take a hike and see if you can find traces of Mr. Hoepfners farmstead while enjoying the areas unique natural splendor. Smith's Island offers you a look at a unique stand of upland habitat.

The islands higher elevation and close proximity to the Lock and Dam means that flooding rarely occurs. Therefore many species of trees and plants found on Smiths Island are rarely, if ever, found on any other island in the Upper Mississippi River floodplain. This makes the island a favorite spot for those who enjoy wildflowers.

Discover what makes Smith's Island such a unique place to visit. Smith's Island is located just off Hwy 67 between Pleasant Valley and Interstate 80.