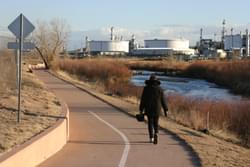 Sand Creek Greenway is one of many greenways within Commerce City that the City has shown exceptional effort in land stewardship through public agency involvement, partnership opportunities, planning and design. The City has worked with a team of consultants including trail planners, landscape architects, ecologists, civil and structural engineers, geotechnical engineers, and environmental scientists over the course of thirteen years to master plan, design, and implement a recreational trail that follows the Sand Creek Greenway.

Commerce City’s segment of the Sand Creek Trail is part of a larger regional greenway connecting 50 miles of urban trails in the northeast Denver Metropolitan area. The master plan was completed in 1994 with the vision of enhancing the wildlife habitat, restoring the stream bank, creating wetlands to enhance the quality of water, and developing trails. The trail connects local businesses and adjacent neighborhoods to the larger trail system. 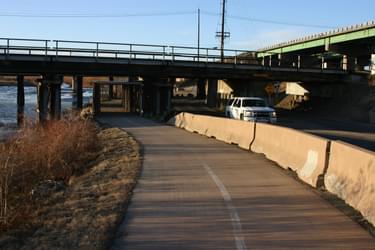 The stream flows through a landscape of bridges, railroads, and huge structures but provides water and habitat for wildlife; photo by Stuart Macdonald

Volunteer efforts were coordinated and managed to include volunteer assistance in planting wetland species, trees and shrubs, soft-surface trail construction, and installation of fencing. The City worked with adjacent property owners to secure right-of-way. Many of these properties became dedicated land and trail easements at no cost to the City.

These efforts resulted in the development of the Sand Creek Regional Trail and Greenway transforming a corridor neglected from years of industrial operation to a regional recreational asset for the City of Commerce City. Planning and design included a 10’ wide multi-use concrete trail with pedestrian bridges to span the South Platte River, Sand Creek and several irrigation ditches, trailheads for walk-up and drive-up access, connections to the local street system for neighborhood access, street underpasses to avoid street crossings, wetland parks for open space preservation and habitat enhancement, railing design for safety of trail users, and utilizing AASHTO and ADA standards for design to allow for an accessible trail route. Interpretive signs and wayfinding exhibits were developed along the open space parks to educate the trail users about the environment and natural processes that occur along the Sand Creek. 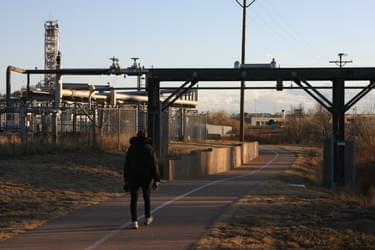 Active industries are found along the trail corridor; photo by Stuart Macdonald

The corridor was comprised of many sites in which it was difficult to build and develop a trail. Most of the terrain and site conditions include areas that were deemed undevelopable due to floodplain, water surface limits and wetlands, steep topography and slopes, utilities, private and public rights-of-way, and many hazardous conditions.

The City worked with the railroad companies, Colorado Department of Transportation and other public and private agencies to address their specific concerns with implementing a trail within this corridor. A new detail for trail construction was developed that included an integral wall and trail surface, with the trail designed to act as the footer for the wall. This detail allowed for minimizing excavation and disturbance along the corridor within these difficult conditions.

Commerce City has made an exceptional effort in developing the Sand Creek Greenway and turning a liability into an asset. Their efforts represent a turning point in the history of Sand Creek and mark the beginning of its restoration and revitalization.