From the City of Redding, CA Community Services Department

Based on a partnership between the City of Redding, Bureau of Reclamation, Bureau of Land Management, and Shasta County, these trails are an example of what is possible through a joint effort between various agencies and local groups.

Callie's first time to walk on the glass panels of the Sundial Bridge; photo by Sue Crowe

Callie's first time to walk on the glass panels of the Sundial Bridge; photo by Sue Crowe

The Sacramento River Trail is viewed by the public as an essential part of what makes Redding a real community. The trail is a vital infrastructure component that contributes to the multi-modal transportation system, it is a valuable recreation amenity, and it helps establish a sense of place.

Once completed, the river trail system will provide 20 miles of public access to the Sacramento River between Shasta Dam and downtown Redding. Based on a partnership between the City of Redding, Bureau of Reclamation, Bureau of Land Management, and Shasta County, this trail system is an example of what is possible through a joint effort between various agencies and local groups.

The City of Redding is home to the national headquarters of American Trails and was a co-host of the 2000 National Trails Symposium. In 2000, Redding and its partners initiated an aggressive eight-year, $30 million trails and bikeway capital improvement program. When the capital program is completed, the Sacramento River Trail will be connected to hundreds of miles of mountain bike, hiking and equestrian trails at both the Whiskeytown and Shasta-Trinity National Recreation Areas. The Sacramento River Corridor runs through the center of Redding. The river corridor has provided a unique opportunity to develop an urban trail system within several miles of lush riparian habitat. Sixty miles of trails have been built so far, connecting residential neighborhoods to regional parks, federal open spaces, the 220-acre Turtle Bay Exploration Park and, most recently, to a regional commercial district.

A grand partnership for trails and the river

Among the greenway partners, over 20 have invested or pledged dollars towards the completion of the River Trail. The Bureau of Land Management and Bureau of Reclamation have contributed land. Construction dollars were given by the California State Department of Parks and Recreation, the National Park Service, the Federal Highway Administration, and the McConnell Foundation.

Many of the trail amenities, such as drinking fountains and benches, were donated by Boy Scouts, service clubs, a local builders exchange and private contractors.

The Sacramento River National Recreation Trail is a paved trail that spans over 17 miles, perfect for biking, walking and running, and is surrounded by wildlife and beautiful river views. 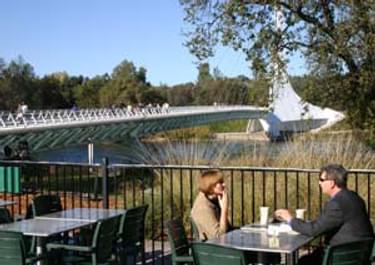 The eight-foot wide trail is designed for pedestrian and bicycling traffic; motorized traffic (such as trail bikes and off road vehicles) are strictly prohibited. Because of this, the trail attracts people of all ages— from the dedicated jogger to the couple out for an evening stroll, from the weekend bicyclist and family outings to the fisherman looking for that ideal angling spot.

Starting at the Diestlehorst Bridge entrance, the southern portion of the trail covers 2.5 miles of fairly flat spaces and rolling hills to the pedestrian footbridge below Keswick Dam. This 13-foot-wide 420-foot-long concrete stress-ribbon bridge is unique to this continent. This bridge type has been used in Czechoslovakia, Switzerland, and Germany. The Diestlehorst Bridge has received national awards from the Portland Cement Association and the California Parks and Recreation Society. Crossing over to the north side, the trail continues for another 1.4 miles over steeper, more rugged terrain that contours with the river.

With a slight break through a comfortable residential area, the trail picks up again for 0.8 of a mile and exits on Lake Redding Drive, near Caldwell Park and the original entrance. From start to finish, the complete loop is approximately 6 miles and can easily be walked in a couple of hours. To complement the original 6-mile loop a 1.7 mile extension of the Sacramento River Trail has been added on the river's north bank from the Diestlehorst Bridge to Benton Ranch. The new section of trail is 12 feet across and runs downriver through Lake Redding and Caldwell Parks under the Market Street vehicle bridge, stopping near the downstream end of Benton Ranch.

Plans are now in the works to complete another 10 miles of trail and rail-trail which will run north and link the stress-ribbon bridge to the Shasta Dam. The River Trail linking to and running through the Turtle Bay Exploration Park is what really makes this trail unique. The Alliance, a Redding not-for-profit organization, is continuing to develop a 300-acre interpretive park on both banks of the Sacramento River, called Turtle Bay Exploration Park. Through the merger of four organizations, Carter House Natural Science Museum, the Redding Arboretum by the River, the Forest Museum and the Redding Museum of Art & History, The Alliance of Redding Museums links these separate disciplines into one coherent experience: Turtle Bay.

Turtle Bay tells the story of the region and its people through wildlife exhibits, gardens and trails, and a 34,000 sq. ft. museum. The network of paved and unpaved trails unifies the varied museum experiences. 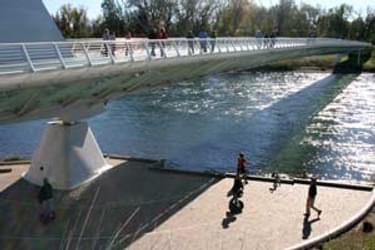 The most spectacular feature of the trail system is a bridge crossing the Sacramento River designed by Santiago Calatrava, world renowned architect, engineer, and artist. The glass-decked Turtle Bay Sundial pedestrian bridge is the centerpiece of the new regional trail system, and has become the urban icon for the northern part of the state. Two major property owners, the City of Redding and the McConnell Foundation, have provided long-term leases to Turtle Bay for the project, which is directly accessed via state highway, city streets, and Redding's urban river trail system.

The Sundial Bridge is part of the City of Redding's Sacramento River Trail system. Turtle Bay operates the café, public restrooms, drinking fountains, and other amenities at the trail entrance. Turtle Bay has a number of other community partnerships. A coalition of Turtle Bay, Shasta College, Sequoia Middle School, and a private environmental engineering firm are restoring salmon habitat in Sulphur Creek on the Arboretum.