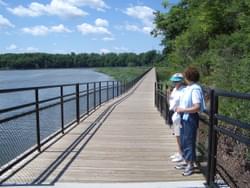 With its crashing waterfalls and meandering path to Lake Ontario, the Genesee River has long been a main attraction for the city of Rochester, New York. In fact, the river, which cuts through the middle of the city, catapulted Rochester’s growth as an industrial hub and is still at the center of much of the city’s activities.

It’s not surprising, then, that in the early 1980s the city envisioned a multi-use trail adjacent to the Genesee River that would connect the Erie Canal Heritage Trail, located to the south, to Lake Ontario, located to the north, thus taking full advantage of the river’s route and recreational popularity.

That vision for this 15-mile trail, named the Genesee Riverway Trail, was completed when an 86-span, 3,572-foot-long bridge was built to cross over a serene river basin, allowing bikers, walkers, and joggers to continue along the trail from its southern sections to enjoy the scenery and surroundings on their way to the lake.

From industry to scenery 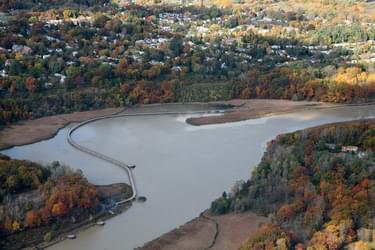 View of the trail structure in the Genesee River Turning Basin

During this time period, the construction of the coal docks required significant infrastructure including wood trestles and ferry slips to transfer over a million tons of coal per year from land to water transportation modes. In time, however, these industries either closed up shop or relocated to other ports, removing the majority of their trestles and piers.

With less activity in the basin, the spot became increasingly remote, used occasionally by fishermen or as a late-night hang-out for local teenagers. When some abandoned docks burned down, area officials and residents took a renewed interest in what was happening in the basin and the safety hazards the neglected structures might pose.

When the continuous Genesee Riverway Trail was proposed, it sounded like a perfect solution to the problem. But designing and constructing the connecting pedestrian bridge would be no simple task—access, security, safety, and environmental concerns all posed enormous challenges to even conceptualizing realistic alternatives.

To get the process started, the design team—which included engineering consultant Stantec, the city’s Architecture and Engineering Services department, the New York State Department of Environmental Conservation, the New York State Department of Transportation, and the US Army Corps of Engineers—met regularly at the site, discussing the myriad constraints, possibilities, and alignments for the bridge. 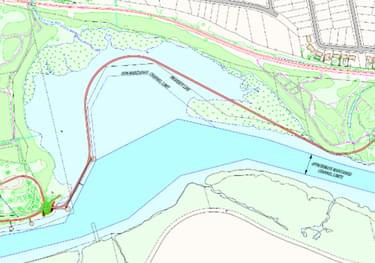 When the project first began to take shape, the city was interested in creating a “rails with trails” corridor to coexist with the adjacent railroad. After considering that kind of alignment, however, the team determined the steep slopes along the train tracks would be difficult to work with and expensive to maneuver around. The railroad company was also apprehensive about the arrangement, since the railroad corridor was very narrow and the trail alignment would require bringing people very close to the tracks, which could create safety, security, and liability issues. With so many potential issues and complexities in creating a rail-with-trail alignment, the project team ruled out that idea.

With countless limitations still facing them, the team continued to look at the river basin itself for an extended pedestrian bridge. Ultimately, they came up with a matrix of alternatives that identified various alignment permutations for evaluation purposes, thus ultimately creating a viable final solution.

Encircled by wetlands as the river is, accessibility and permitting were the biggest challenges to finding the perfect combination. Sandwiched between a Coast Guard navigation channel and fragile wetlands, the space available for the bridge was limited. And with such a sensitive environment surrounding the basin, constructing the bridge without severely impacting the vegetation would be tricky, not to mention locating it so that it would not impede the ecosystem’s processes or destabilize the riverbanks. 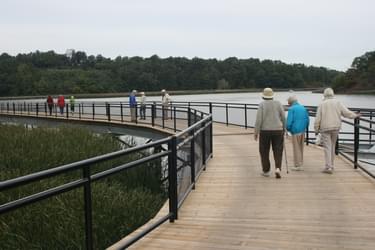 After rounds of public consultation meetings, the project team settled on a bridge alignment that circles the rim of the basin. This way, the bridge avoids the navigation corridor but is far enough away from the vegetation to minimize environmental impacts. In fact, the contractor had to clear very little vegetation once construction began since they did much of the preparatory work during the winter when the plants were dormant. Using crane mats with geo-fabrics, the contractors worked on top of the dormant plants and avoided vegetation as much as possible. By the next growing season, the plants were right on schedule, indicating no real impacts.

Another method for minimizing those impacts was using a helicopter to reduce the amount of time heavy equipment was needed in the river channel. The bridge was designed to allow the contractor (Crane-Hogan Structural Systems, Inc) to use repetitive sequences, meaning different sections could be built off-site and pieced together in the river. With a helicopter, the contractor was able to simply put those segments in place, one by one. Over half of the bridge was placed in only three days by helicopter, while the remaining portion was placed via barge and crane. Without the helicopter, the crew would have had to spend much more time in the river channel using barges and cranes, which would have, in turn, had many more negative impacts on the surrounding environment.

It was still necessary, of course, to make some adjustments to the channel bottom to accommodate the bridge’s construction and stability. Dredging, however, was not an option since contamination from the past industrial uses would have meant removing the contaminated soils and transporting them on barges, which was too costly. Working with the US Army Corps of Engineers and the New York State Department of Environmental Conservation, the project team instead displaced sediment left and right to make a path for equipment in shallow areas. With approximately four inches of sediment accumulating per year in that area, the soils naturally settled back once the bridge was constructed.

While the sediment provided a flexible path for equipment access, it also created some structural challenges for the project team since so much sediment meant an unstable foundation. To find a stronger base, the team did soil borings to 100 feet in some areas, where they finally hit rock. The selected pier foundations were determined by the depth of rock. Two-foot diameter concrete drilled shafts with one-foot diameter columns were used where rock was reasonably near the surface (13 pier locations). Where rock was deeper, six-inch diameter steel pipe piles were driven and used to construct simple pier bents (72 pier locations).

Once the multitude of design challenges were settled, the team was able to get to the details of the bridge itself, using materials intended to reduce the need for frequent maintenance. The bridge is composed of galvanized steel beams for the superstructure, as well as pressure-treated wood planks for the deck to better match the natural surroundings. The railings are black powder-coated galvanized steel with black vinyl coated steel mesh between the rails to protect people from falling into the water. With such durable materials, the city only needs to keep up with maintaining the decking itself.