This 23-mile linear park within the cities of Fort Wayne and New Haven in Allen County, IN is located along the banks of the St. Marys, St. Joseph, and Maumee Rivers. 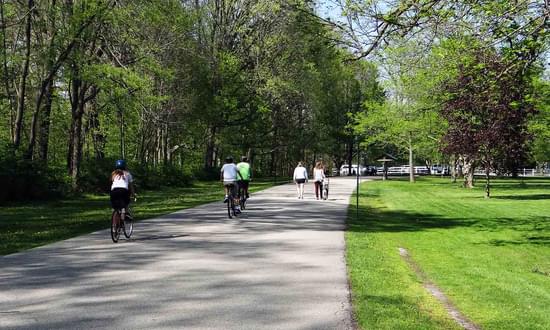 Cyclists and pedestrians walking on the Rivergreenway in Foster Park, Fort Wayne, Indiana

Before the popularity of trails and greenway corridors, Fort Wayne residents had access to a fledgling trail system along its rivers beginning in the mid-1970s. Now the robust 23-mile trail network traverses several miles along the St. Joseph, St. Marys and Maumee Rivers connecting the cities of Fort Wayne and New Haven within Allen County, Indiana.

This seminal network of trails is considered the backbone of an even greater trail network within the County that consists of more than 200 miles of trails in development or proposed. In the near future, the Rivergreenway will be connected to a series of trails being developed in southwestern Allen County, providing users with 40-miles of continuous trails as an east/west corridor across the County.

The continued development of the Rivergreenway network and many additional trails within Allen County, Indiana, have been made possible through the grassroots efforts of three greenway advocacy groups— the Greenway Consortium, Aboite New Trails and Northwest Allen Trails. These three groups have partnered with the cities of Fort Wayne and New Haven and Allen County to plan and develop a safe, interconnected, multi-use trails network.

The Rivergreenway originates at the confluence of the three rivers in Fort Wayne, Indiana. Like spokes on a wheel, it branches out in three directions following the natural corridor along each river. The St. Joseph Pathway is three miles in length and delivers trail users into Johnny Appleseed Park. Future plans will extend this trail an additional three miles to yet another popular city park, Shoaff Park.

With this future development, along the way users will also be able to safely access the campuses of Indiana University and Purdue University of Fort Wayne, and nearby Ivy Tech Community College. This pathway also boasts an additional mile of trail located on top of a floodwall that runs along the east side of the St. Joseph River and makes a great surface for rollerblading while providing a scenic view of downtown Fort Wayne.

The St. Marys Pathway is almost 9 miles in length. Users can easily access several of the city’s parks along this trail, most notably Headwaters Park and the Historic Old Fort in downtown Fort Wayne as well as Foster Park and Tillman Park on the city’s south side. Headwaters Park boasts many of the city’s summer festivals and provides cool summer fun for kids in its public fountain.

The Historic Old Fort is a replica of the 1816 fort that acts as an education center offering a representation of life in the untamed "west." Foster Park includes a two-mile loop around its popular public golf course and stunning floral gardens. Also located along the St. Marys Pathway, near the Old Fort, are a series of six murals that were completed by youth within Fort Wayne and sponsored by organizations which serve underprivileged youth. Branching off the St. Marys Pathway in Swinney Park is the Yarnelle Trail which runs one mile to the nearby Rockhill Park.

The Maumee Pathway is nearly nine miles in length and provides trail users with access to the cities of both Fort Wayne and New Haven. Almost three miles of this serene pathway are maintained by the New Haven-Adams Township Parks and Recreation Department and the balance is maintained by Fort Wayne.

This sizeable trail provides users with an opportunity to escape the urban landscape with much of the trail concealed behind large plots of land, including a golf course and driving range as well as the City of Fort Wayne’s Biosolids Facility. Future plans will link the Maumee Pathway through New Haven with Fort Wayne’s south side via the Six Mile Creek Trail, which will connect to the existing St. Marys Pathway providing a looped system consisting of 26 total miles.