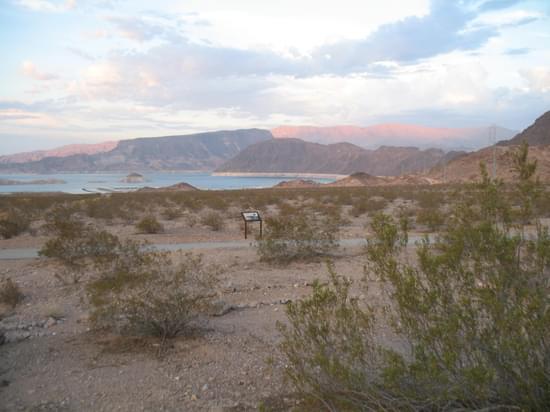 Old trail and new blacktop, with lake in the background showing mineral deposits after 15 years of drought; photo by Tony Taylor

In addition, the River Mountains provide habitat for the threatened desert tortoise, a species seldom seen as it resides in desert settings and is only active in the warmer months. The sighting of these special species make the daily sighting of jackrabbits, coyotes, bluebirds, lizards and many other animals go relatively unappreciated.

The vistas along the trail are outstanding. The River Mountains form the scenic backdrop for the community of Henderson, Nevada, along the eastern side of the Las Vegas Valley. The maintenance of this view from the valley is valued and has been recognized in local and regional open space planning.

But the views from the trail are also outstanding and include panoramas of the Las Vegas Wash, Lake Mead, Hemenway Valley, Eldorado Valley and perhaps the most spectacular view is the view of the Las Vegas Valley. In the evening, as the sun is setting, the lights of the Las Vegas Valley transition the valley from that of a community to that of a showplace. The evening views from the trail can be forever lasting.The River Mountains Loop Trail has been professionally designed and constructed. Each segment has been designed by a professional engineering company and constructed following professional construction drawings and specifications. Maintenance of the trail was an important part of the design process so maintenance needs were significantly reduced through trail design. Specific maintenance for the trail lies with each of the primary jurisdictions along the trail just as design and construction was accomplished by the local jurisdictions.

Big Bike (metal) at the confluence of the RMLT and Bootleg Canyon International Mtn Bike area; photo by Tony Taylor

The trail is an educational path. As it winds through a wide variety of settings, interpretive wayside exhibits provide trail users with an equally wide variety of educational opportunities. The interpretive plan for the trail identified 18 interpretive themes including: ancient peoples, Old Spanish Trail, Historic Railroad, Bighorn Sheep, Flood Control, and Mining & Geology of the River Mountains. The majority of the wayside exhibits are in fabrication and will be installed in the Spring of 2010. Informational kiosks have been installed at six existing trailheads and additional trailheads are under development.

In addition to the interpretive signing on the trail, there are concrete trail monuments located every half mile to orient trail users to their location on the trail. Each monument includes the location with the mile marker designation to keep trail user oriented. Detailed maps and trail brochures have been produced to support use on the trail. These are professionally prepared aerial photographs of the area with the trail overlaid on the photo with the mile markers highlighted to provide additional support for trail users. The outreach effort on behalf of the mangers of the trail has been extensive.

History of the Trail Partnership

The concept of the River Mountains Loop Trail was conceived in the early 1990’s in discussions of how to connect Lake Mead National Recreation Area with the local communities. The discussions reached out to the Southwest Gas Trailhikers, a local hiking organization headed by John Holman. As more groups got involved, the trail vision expanded beyond the evolved from just connecting the park with Boulder City to connecting the park with the communities in the Las Vegas Valley.

The Lake Mead NRA Superintendent requested the assistance of the National Park Service River, Trails and Conservation Assistance Program (RTCA) in developing a community organization to develop the concept into an actual trail alignment. Barbara Rice, with the RTCA, accepted the task and met with National Park Service representatives to develop a list of potential candidates who could assist in the development of this concept.

The group organized and elected to call themselves the River Mountains Trail Partnership. With John Holman as the Chair, one of the first orders of business was to request resolutions of support from each of the organizations. Over the next year and a half, thirty-one resolutions of support were received from all the land owners and jurisdictions along the conceptual trail corridor. 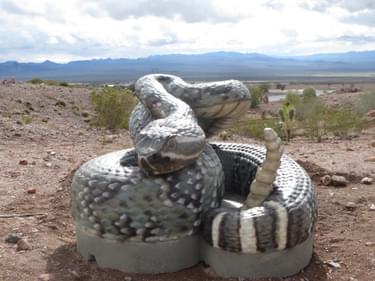 Giant concrete rattlesnake in Bootleg Canyon by the RMLT; photo by Tony Taylor

One of the first orders of business completed by the trail support group was the collection of resolutions of support from every jurisdiction and land owner along the trail corridor and all user groups interested in trail development. The group also developed a Trail Planning, Development, and Management Guide for the River Mountains Loop Trail. This guide addressed a variety of issues from the funding strategy for the trail to the signing and interpretive plans. The Partnership continues to meet monthly providing constructive input into the continued development of the trail including solutions for operational challenges.

The guide also addressed sign standards and included an interpretive wayside plan for the entire 35 mile loop trail. The standards for the trail, a 12-foot wide multi-use paved path, was consistent with the State of Nevada for shared use paths to meet Transportation grant criteria.

In 1997, the Southern Nevada Public Lands Management Act (SNPLMA) provided for the sale of Federal lands in Clark County with the revenue generated to be reinvested in public improvement projects. It took a while for the program to evolve but the River Mountains Loop Trail with its funding strategy in place was well positioned to participate in that program.

Over the next 10 years, TEA-21 federal funds through the Nevada Department of Transportation, plus SNPLMA) support allowed Henderson, Boulder City and Lake Mead National Recreation Area to construct the majority of the trail.

Addition recreational enhancements are now being designed for the trail. Benches have been installed as part of the Boulder City trail construction and a rest area was installed in partnership with the Southern Nevada Water Authority on the Henderson segment of the trail. Trailhead kiosks have been installed at seven trailheads and there will be 14 interpretive wayside exhibits in place by Spring 2010. The National Park Service is installing a rest area at an overlook located within Lake Mead National Recreation Area. Additional enhancements will be added as opportunities arise.

For the future, there is a firm commitment from each of the participating jurisdictions to actively manage the trail— from monitoring use on the trail to identifying management issues— to maintenance and patrol. The City of Henderson adopted the “Trail Watch” Program from Anchorage, Alaska to use volunteers to monitor and patrol use, and to report their observations to Trail Watch which will communicate with the different branches of City government. Similarly, the City of Henderson has hired law enforcement officers to specifically patrol the trail. Trail vehicles have been acquired through grants to support these patrols.