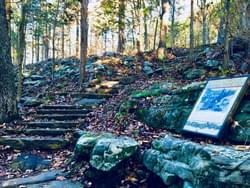 Remnants of an ancient stone wall

Remnants of an ancient stone wall

Tucked away in the rolling Shawnee Hills of southern Illinois is Rim Rock National Recreation Trail. Rim Rock Trail leads around the rim of a rock escarpment and features vistas of a canyon below, remnants of prehistoric Native American life, and diverse habitats. Whether you’re looking for a place to picnic with your family, hike, study Native American culture or native ecosystems, or just enjoy the peaceful beauty of nature.

Rim Rock has a long history of drawing people to its forested bluffs for hiking and picnicking. In 1980, it was designated a national recreation trail because of its exceptional scenic beauty and historic values. To early settlers, this unique formation was known as “the Pounds,” an old English term meaning “some sort of enclosure.” This is how the valley lying to the east got its name, Pounds Hollow.

Rim Rock is known for its spectacular show of spring woodland flowers along its upper and lower trails. The upper trail is paved and less strenuous for hikers. The lower trail has a dirt surface and leads along the base of the bluffs before looping back to the parking lot. The upper trail features interpretive signs explaining the past uses of the area and the natural and cultural characteristics found today. The trail leads past remnants of a stone wall built by prehistoric Native Americans, a Civilian Conservation Corps plantation, and an observation platform. Here you have the option of descending the stairs to the valley and Ox-Lot Cave.

While hiking the lower trail, you will stroll along the base of impressive sandstone bluffs that tower above you with a close-up view of strange honeycomb patterns in some areas and huge boulders that fell away from the bluff millions of years ago. One of the first features you reach is the infamous Ox-Lot Cave. Native Americans were the first to use the cave as a natural shelter. Standing by the cave, you will feel the cool air rising from the opening and can stop to listen to the sounds of the water trickling from the base of the bluffs. All of this takes you back to the days when early European settlers used the area to keep their livestock while logging the area.

Whether you’re looking for a place to picnic with your family, hike, study Native American culture or native ecosystems, or just enjoy the peaceful beauty of nature, Rim Rock National Recreation Trail and picnic area is the place for you. 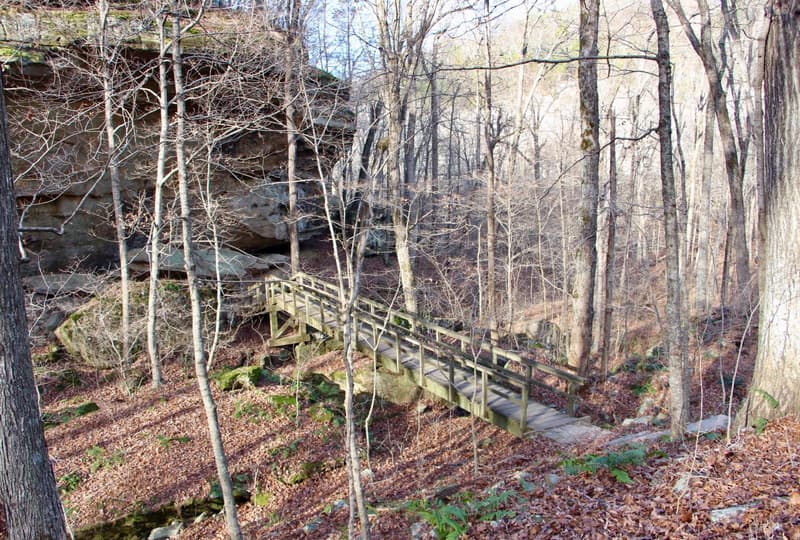 Main bridge along the lower trail. Photo by Jonathan Voelz.