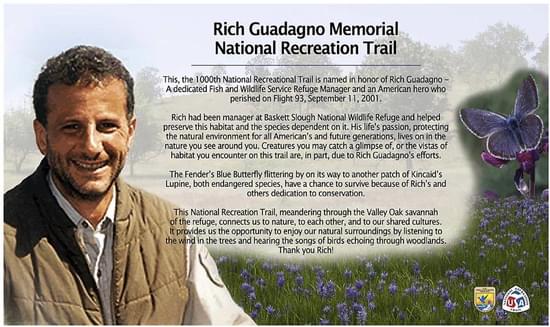 The memorial plaque with a photo of Rich Guadagno

Deputy Secretary of the Interior Lynn Scarlett dedicated the 1,000th National Recreation Trail on June 2, 2007, the 15th Annual National Trails Day, at Baskett Slough National Wildlife Refuge, near Dallas, Oregon, and dedicated it to the one of the refuge's former managers, Rich Guadagno, who was killed on September 11, 2001, aboard United Flight 93 in Pennsylvania.

Secretary Kempthorne's announcement coincides with the 15th Annual National Trails Day. The Rich Guadagno Memorial Trail joins a network of more than 11,000 miles of trails throughout the country.

"The National Recreation Trail System connects Americans with the beauty of the great outdoors," Secretary Kempthorne said May 30 in announcing the new trails. "It is entirely fitting that the 1000th trail be named after Rich Guadagno, a man who dedicated his life to preserving nature and sharing his passion for the land with others."

Rich was on United Flight 93 because he was returning from a vacation visiting his family in New Jersey. He is believed to be one of those who fought those who sought to hijack the airplane and crash it into the nation's capital. His law enforcement badge was found in the wreckage.

In announcing the Rich Guadagno Memorial Trail as the 1000th National Recreation Trail, Secretary Kempthorne noted, "No other national trail designated this year sends a more powerful message. Its selection connects us all with our American conservation and outdoor traditions."

The 1.72 mile Rich Guadagno Memorial Trail takes hikers through rare native oak savanna and upland prairie habitat and shows what Rich was so dedicated to protect. It will put people in an historic landscape to learn about habitat conservation and restoration. Walking along the trail, visitors may hear Ruby crowned kinglets, sparrows and juncos. During this time of year, the world's largest endangered Fender's Blue Butterfly population will be feeding on Kincaide's lupine. 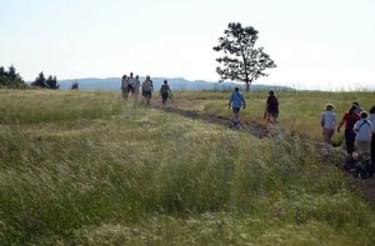 Along the trail through habitat of endangered plants and butterflies

"I am particularly proud that the Secretary has chosen to honor Rich Guadagno, an avid sportsman, who worked with so many people and groups to convey a sense of wonder about wildlife conservation and outdoor recreation" said U.S. Fish and Wildlife Service Director H. Dale Hall. "The 1000th National Recreation Trail designation will help more people discover the many recreational opportunities available on national wildlife refuges and at national fish hatcheries."

With this year's additions, the U.S. Fish and Wildlife Service now administers 58 National Recreation Trails; 57 are on national wildlife refuges and one is on a national fish hatchery.

Suzanne Knapp Policy Advisor, Natural Resources Office, presented these remarks on behalf of Oregon Governor Kulongoski: "Governor Kulongoski sends his apologies for not being with you this evening to be a part of this event. Nonetheless, he recognizes the special significance of celebrating this occasion— in commemorating a hero, and dedicating this trail to his name.

"It is a privilege to be a part of this gathering to honor Rich Guadagno and the legacy that he left in the Willamette Valley. Oregon and Oregonians benefited from his passion and his dedication. And the trail that will bear his name will become a special place for all that use it.

"As our footsteps tread on this trail, or any other, our travels will enrich our minds, elevate our spirits, and sharpen our vision. A trail into and through the natural world connects us to the land, and links our souls to nature's wisdom, richness, and beauty. We are inevitably renewed. We are always changed. Today, and all days, this trail will link us to the spirit of Rich Guadagno.

"And as we take to the trails in all of Oregon, if we are at all inspired to be better stewards of our land, if we begin to understand the value of protecting what we have, if we treasure our quality of life and promise to keep it intact for future generations... then we have taken the right trail." 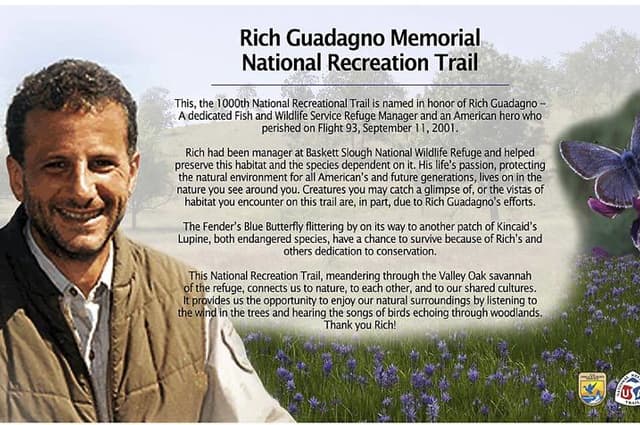