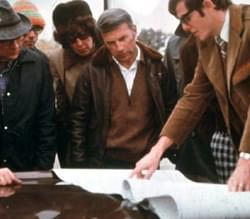 American Trails and the trails community nationwide mourns the passing of Joe Shoemaker in August, 2012. Before it was in vogue, Joe was one of the prime movers and initiators of what has now become a worldwide movement of planning and developing urban trails and greenway systems.

The vision also included sorely needed river clean-up, new parks and feature areas, and urban whitewater kayak and tubing courses. Over the years the project grew into a 45-mile long greenway through the Denver metropolitan area and into adjacent counties. This project was the first of its kind in the region and created a prototype that served as a model for hundreds of cities across North American as well as inspiring projects in Europe and as far away as China.

Joe was both a visionary and a doer! He lived a full life like a champion and left his mark and legacy in a movement that continues to reshape cities four decades after its initiation! He also inspired all of us who worked with him to strive for excellence and to never give in when seeking a righteous vision.

Joe Shoemaker’s commitment to the importance of greenways made him an influential figure in the Colorado trails community for many years. At our first state trails conference in 1986, which I had nerve-wrackingly planned for months, Governor Richard Lamm had agreed to give the keynote address. The Governor, of course was late. But Joe, who had been warming up the audience, carried on at length and kept the crowd enthralled with his enthusiasm about trails across Colorado. When the Governor arrived, he had a very tough act to follow. Everyone I talked to agreed that Joe was the real star of the conference.

Joe also developed a deep concern for the state park system, and served as the chair of the Colorado State Parks Foundation. At a training meeting of state parks staff one winter, Joe gave the featured pep talk. To everyone’s delight, he rattled off the names of every one of the dozens of state parks, in alphabetical order, a feat no one else could do.