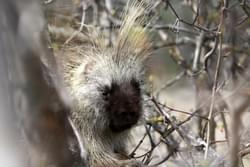 Included here are terms used in the Planning Trails with Wildlife in Mind or terms likely to be encountered in other sources of wildlife and habitat information.

ABIOTIC. Not living; often referring to the non-living components of the ecosystem such as water, rocks, and mineral soil.

BASELINE SURVEY. The initial set of measurements in an ongoing monitoring study, typically done before the system is changed by management

BIODIVERSITY. The variety of life and its processes; including the variety of living organisms, the genetic differences among them, the communities and ecosystems in which they occur, and the ecological and evolutionary processes that keep them functioning, yet ever changing and adapting.

CANDIDATE SPECIES. A species being considered for listing by the federal government as threatened or endangered.

CANOPY. Formed by the branches and leaves of trees in a wood or forest.

CARRYING CAPACITY. The number of recreationists that can be accommodated in a specific area based on ecological, physical, facility, and/or social factors.

CONNECTIVITY. The state of being functionally connected by movement of organisms, materials, or energy.

CORRIDOR. Narrow continuous areas of favorable habitat that allow the movement of animals, birds and plants along them.

CORVIDS. Birds of the Corvidae or crow family.

DETRITUS. Organic particles or other loose material that result directly from disintegration of leaves, stems, or other materials.

DISPERSAL. The managerial action of distributing a given amount of wilderness use over a larger area, such as through the construction of additional trails, with the intention of lessening impacts to wilderness areas.

DISTURBANCE. A discrete event, either natural or human-induced, that causes a change in the condition of an ecological system.

ECOSYSTEM. A system formed by the interaction of living organisms, including people, with their environment. Spatially, ecosystems are described for areas in which it is meaningful to talk about these relationships.

ECOSYSTEM MANAGEMENT. The skillful, integrated use of ecological knowledge at various scales to produce desired resource values, product, services, and conditions in ways that also sustain the diversity and productivity of ecosystems. This approach blends physical, biological, and cultural/ social needs.

EDGE. A significant change in structure or composition caused by natural events such as fire and wind or human-caused events.

EDGE EFFECTS. Tendency to have greater variety and density of organisms in the boundary zone between communities.

EDGE SPECIES. Species living primarily or most frequently or numerously at junctions of communities.

ENDANGERED SPECIES. Any species listed under the Endangered Species Act which is in danger of or threatened with extinction throughout all or most of its range.

ENVIRONMENTAL IMPACT STATEMENT (EIS). An environmental analysis, as required by the National Environmental Policy Act (NEPA), for proposed federal actions that may have a significant effect on the quality of the human environment (40 CFR 1502.3).

EROSION. The detachment and movement of soil from the land by wind, water or gravity.

EXOTIC SPECIES. Species that occur in a given place, area, or region as the result of direct or indirect, deliberate or accidental introduction of the species by humans, and for which introduction has permitted the species to cross a natural barrier to dispersal.

FACULTATIVE. Having the capacity to live under different conditions; organisms that can live in a certain way but are not obliged to and may, under certain conditions, adopt another mode of life.

FLAGSHIP SPECIES. Species that are popular and charismatic and which therefore attract popular support for their conservation.

FLUSHING DISTANCE. The distance at which wildlife flee from a disturbance.

FORAGE. All browse and herbaceous plants that are available to feed livestock or wildlife.

FORBS. Seed plants with nonwoody, green stems (herbaceous plants); especially a plant other than a grass.

FOREST-INTERIOR SPECIES. Species living primarily or most frequently in the interiors of forests.

GUILD, SPECIES. Group of species having similar requirements and foraging habits and thus similar roles in the community.

HABITAT. The natural environment of a plant or animal.

HABITAT EVALUATION PROCESS (HEP). A process developed by the U.S. Fish and Wildlife Service as a structured and quantitative way of evaluating habitat before and after a project and determining how much mitigation is needed to compensate for damage.

HABITAT FRAGMENTATION. A process by which habitats are increasingly subdivided into smaller units, resulting in their increased insularity as well as an overall loss of habitat area.

HABITAT SECURITY. The condition of being safe from disturbance.

HABITAT SUITABILITY INDEX (HSI). A scale is created by rating the habitat for each species before and after a project on a scale from 0 (= totally unsuitable habitat) to 1.0 (= optimal habitat).

HARDENING. The manual, mechanical, or chemical compaction of the trail tread resulting in a hard, flat surface that sheets water effectively and resists the indentations that are created by use.

INDICATOR. A specific measurement used to gauge a resource or social condition.

INDIGENOUS SPECIES. Any species of flora or fauna that naturally occurs in wilderness areas that was not introduced by humans.

INDIRECT EFFECTS. Those effects occurring at a later time or at some distance from the triggering action.

LACUSTRINE. Living in or beside a lake.

LANDSCAPE. Heterogeneous land area composed of a cluster of interacting ecosystems that is repeated in similar form throughout.

LEAVE NO TRACE (LNT). Educational program designed to instill behaviors in the wilderness that “leave no trace” of human activities or occupation.

LIMITS OF ACCEPTABLE CHANGE (LAC). A planning framework that establishes explicit measures of the acceptable and appropriate resource and social conditions in wilderness settings as well as the appropriate management strategies for maintaining or achieving those desired conditions.

LANDSCAPE SCALE. At the broader scale of a landscape, i.e., several square kilometers.

MANAGEMENT INDICATOR SPECIES (MIS). A wildlife species whose population status and trend in a certain habitat type indicates the population and trend of other species that depend on the same habitat.

MATRIX, LANDSCAPE. The most extensive and most connected habitat type in a landscape, which often plays the dominant role in landscape processes.

METAPOPULATION. A set of partially isolated populations belonging to the same species. The populations are able to exchange individuals and recolonize sites in which the species has recently become extinct.

MITIGATE. Actions to avoid, minimize, reduce, eliminate, or rectify the adverse impact of a management practice.

MONITORING. The collection of information to determine the effects of resource management and to identify changing resource conditions or needs.

MULTIHABITAT SPECIES. A species that uses more than one type of habitat over the course of the year or its life.

NATIONAL WILDERNESS PRESERVATION SYSTEM (NWPS). All lands covered by the Wilderness Act and all subsequent designations, irrespective of the department or agency having jurisdiction.

NATIONAL WILD AND SCENIC RIVER SYSTEM. Rivers with outstanding remarkable scenic, recreational, geologic, fish and wildlife, historic, cultural, or other similar values designated by Congress under the Wild and Scenic Rivers Act for preservation of their freeflowing condition.

NATIVE SPECIES. Any species of flora or fauna that naturally occurs in an area and that was not introduced by humans.

NEOTROPICAL MIGRANT. A bird that migrates to temperate North America from Central or South America and back over the course of the year.

NEST PARASITES. Cowbirds and other birds that lay eggs in nests of other species of bird and leave their young to be raised by others.

NEST PREDATION. Jays and other birds that prey on eggs or nestlings.

OBLIGATE. Obligatory; limited to one mode of life or action.

PALUSTRINE. Growing in marshes or swamps.

PASSERINES. Large order of birds, which includes small and medium-sized perching birds and songbirds such as crows, tits, warblers, thrushes, and finches

PATCH, LANDSCAPE. A nonlinear surface area differing in appearance from its surroundings, typically a small (less than 50 acres) portion of the landscape; small patches the size of an individual tree canopy are frequently called gaps.

PREDATION. When an organism catches and kills other organisms for food.

PUNCHEON. A log or timber structure built to cross a boggy area. Usually consists of sills, stringers, and a log deck.

RANGE. The geographic extent of habitat used by a species.

RAPTORS. Hawks, eagles, owls or other birds of prey.

RECORD OF DECISION (ROD). The portion of a Final Environmental Impact Statement that identifies the proposed action, signed by the appropriate deciding officer.

RECREATIONAL STOCK. Pack and saddle stock used primarily for transporting recreationist and their gear. Both commercial pack station and individual stock are included. Usually horses and mules but may also be llamas, or goats.

RIPARIAN. The land and vegetation immediately adjacent to a body of water, such as a stream, lake, or river; such vegetation depends upon a perpetual source of water.

SENSITIVE SPECIES. Those species on an official state list or recognized by another agency, needing special management to prevent them from becoming endangered or threatened.

SINGLE-TRACK TRAIL. A trail wide enough only for one user to travel and requires getting off the trail to allow another user to pass.

SUCCESSION. The more or less predictable change in the composition of communities following a natural or human disturbance.

TAKE. Harass, harm, pursue, hunt, shoot, wound, kill, trap, capture, or collect, or to attempt to engage in any such conduct.

UNTRAMMELED. An untrammeled area is which human influence does not impede the free play of natural forces or interfere with natural processes in the ecosystem.

WATERSHED. The entire area that contributes water to a drainage system or stream. Portion of the forest in which all surface waters drain to a common point.

WETLAND. Areas that are inundated by surface or ground water with a frequency sufficient to support a prevalence of vegetative or aquatic life dependent upon the water for growth and reproduction.

WILDLIFE SIGN. Feathers, rubs, scraps, beds, and other evidence of wildlife use.