By Vonie Gilreath, Friends of the West Ashley Greenway

The City of Charleston leads fundraising efforts is dedicated to involving the community in the West Ashley Greenway project. 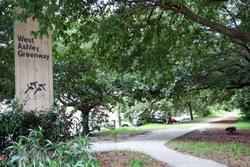 Charleston is the home of the West Ashley Greenway (WAG), an 8-mile trail laid on a former rail line removed in the 1990s. The greenway connects 16 neighborhoods, links 3 schools, and also is located conveniently in relation to bus stops, shopping centers, and a library, among other points of interest within the city.

Located over the Ashley River Bridge that connects to the historic Charleston peninsula, the WAG is part of the national East Coast Greenway Trail. The City of Charleston completed a design plan of the greenway in April of 2010 and it is this public input effort that serves as an example of the importance of patience and perseverance in completing plans that involve many community partners.

Two steps back, one step forward

The City of Charleston has worked for the last two years to provide a safe and accessible trail system to all residents and visitors. The effort has not been without controversies that have plagued similar projects throughout the country; in 1999, neighborhoods along the WAG met with city representatives and were not interested in improvements (such as surfacing) that would bring more people on the greenway. The perception was that crime would follow. It was nearly seven years before the issue of improvement would be addressed again. Show me the money

Fast forward to July of 2010- at the time of this writing, Charleston City Council is meeting for the first reading of a $600,000 plus bond to begin implementation of a greenway plan that was over ten years in the making. The bond is expected to pass easily and will be combined with a proposed transportation enhancement grant of over $150,000.

This is in addition to a $230,000 sidewalk connection project to the WAG completed in January of 2010 paid for by Charleston County Transportation funds allocated by state gas tax revenues. Another scheduled sidewalk project connecting to the WAG is scheduled to be completed in 2011 at a cost of nearly $150,000 paid for by Charleston County Transportation Sales tax funds.

In 2008, the Medical University of South Carolina’s Safe Kids, the Berkeley-Charleston Dorchester Council of Governments and the City of Charleston coordinated on grant application from Federal and the city was awarded $10,000 to put in four crossing lights at two critical road crossings near a recreation center and school. A grant from the Robert Wood Johnson Foundation funded through the BCDCOG, provided for greenway expert Chuck Flink to come in to the Charleston area to discuss the economic and environmental impacts of greenways. 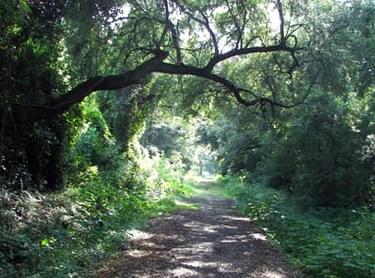 Along the abandoned railroad corridor

Several efforts were made before 2006 to try to address the improvements to the WAG but it simply took time because some of those objecting to the improvements moved away and, over the last two years, efforts were made by the police, advocates of the East Coast Greenway and City of Charleston staff to educate the neighborhoods on the lack of crime statistics showing that greenways cause crime.

In addition, two of the shopping centers along the greenway were revitalized and including the construction of a large Harris Teeter, This, combined with the efforts to connect the sidewalks to the greenway and support the greenway schools, led several greenway neighborhood presidents to meet with the mayor to get his support to begin the design effort.

KIMCO Realty, owner of the Harris Teeter shopping center, then stepped forward with $25,000 to complete the planning effort. The City hosted an Open House and Design Workshop with urban edge studio (a studio of Seamon Whiteside and Associates) in August of 2009. A public presentation of design concepts followed the workshop; this plan is included as part of this nomination. The final plan includes locations for water stops, signage, recommends improved crossings, bollards, a children’s garden and many other amenities.

In summary, the City of Charleston and the partners involved in this effort understood that a long term master plan was necessary in order to move forward with identifying further funding partners. The complete plan will take several years and cost over $4 million. To date, nearly $1 million in surfacing, sidewalk and other improvement has been spent, allocated to, is under construction or is awaiting approval by the city council and SCDOT.