Built in 1991 by Eugene Bureau of Land Management employees and volunteers, this unique footpath arises from the streamside in the moisture rich hills called the Coast Range by local Willamette Valley residents. This is specifically a hiking trail, connected to BLM's popular Whittaker Creek campground.

The trail climbs at a moderate rate, winding uphill through three significant ecosystems; riparian, second growth Douglas fir, and the pristine Old Growth Ridge. Each system has its own special plant and animal species that thrive there. The trail makes a loop of about 1.5 miles.

The riparian or stream zone, is considered one of the premier salmon and steelhead streams in all of the Coast Range. The huge Chinook use it in November, followed by the smaller, more energetic Coho, or Silver salmon, in December, and finally the powerful Steelhead, from January thru early March. This year-round, cool water stream is is also home to many four-legged critters that frequent its waters.

It is also the nucleus of a semi-primitive campground that has become extremely popular among residents of the greater Eugene-Springfield area. The site has 31 campsites with no electric hook-ups, a fine swimming area, and access to the Siuslaw River, which in only a short distance away. Some of the campsites are physically connected to the river itself.

The trail continues up into the second growth zone, home to 60-year-old Douglas fir stands, mixed with other tree species that make up a diverse ecosystem that is rapidly reaching maturity. The trail ascends to a ridge where, in the 1950s logging activity ceased, and the higher reaches of the hill were left untouched.

At that point, the hiker can witness old Douglas Fir trees in their original habitat. This area is also home to the northern spotted owl and the marbled murrelet. The BLM rangers have built comfortable benches along the way for the hikers to rest and refresh themselves.

An additional mile-long loop was added to the main trail and was completed in September 2004 for the public to enjoy. The loop highlights the scenic Whittaker Creek itself, traveling along the stream bank as it returns to the park area. This new, long awaited enterprise gives the entire system a sense of completion. 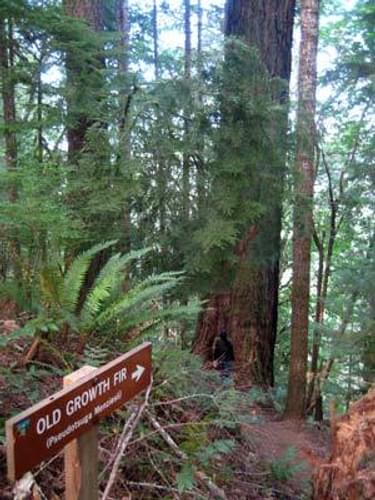 The primary trail surface is native soil. the Average Width is 30 inches and the Minimum Width is 24 inches. The Trail Grade averages 10% with a maximum grade of 16% in some places. The trail is barrier free, though steep, for a quarter mile. Steps on the upper slopes limit the accessibility. Taking the left-hand fork soon after leaving the trailhead leads to the more accessible flat trail section along Whittaker Creek.

A diverse variety of bird life, from the seldom seen pileated woodpecker, northern spotted owl, marbled murrelet to the ubiquitous Oregon junco frequent this area. Signs of larger animals, such as raccoon, mink, bear, elk, deer and beaver are evident. Whittaker Creek is part of the Siuslaw River watershed that drains water from the Coast Range to the Paciﬁc Ocean.

The creek is a designated watchable wildlife site because it provides habitat of vital importance to anadromous ﬁsh species which include coho and chinook salmon, steelhead, cutthroat trout and other ﬁsh species. Chinook and coho salmon, as well as steelhead trout can be observed in the fall and winter months spawning in the creek next to the campground.

From Eugene, OR follow Hwy 126 about 30 miles to Siuslaw River Road just west of Walton. Turn left on Siuslaw River Road and follow the road for 1.5 miles to the intersection of Whittaker Creek Road. Turn right on Whittaker Creek Road, and the main entrance will be on the right. The trailhead can be accessed on the back side of the park at campsite 24. Vehicle parking is available in the campground parking lot, free of charge.