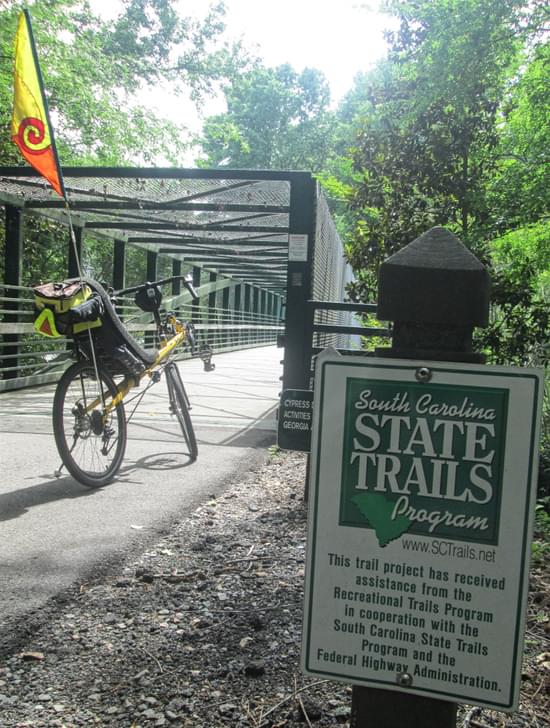 Named after former Mayor Thomas W. Greene, the trail is currently over six miles of paved recreational trail. It follows an abandoned railroad right-of-way purchased by the city in 1988. The trail runs through natural terrain, neighborhoods, and the riverfront of North Augusta.

The first phase, a 3.3 mile section, was completed in 1995. Another 1.5 miles wass completed in 1999. Later that year, the Greeneway Bridge, a 180-foot arch-truss pedestrian bridge, closed the gap between the two sections. The bridge is located a the site of a former railroad trestle and crosses a major thoroughfare on the South Carolina Natural Heritage Corridor.

The trail serves as a reminder of the days when the community was the terminal point of the Charleston to Hamburg Railroad over 150 years ago. That railroad followed the trading path created by the Creek/Chicksaw Indians. When completed in 1833, the railroad was the world's longest steam-powered railroad, extending 136 miles from Charleston to Hamburg, South Carolina, a town that preceded North Augusta between 1821 and the early 1900s.

Development of the Greeneway is ongoing and construction is currently underway on a 1.6 mile loop extension. this section is being constructed in conjunction with a planned 200-acre traditional neighborhood development located along the Savannah River. The development includes 33 acres of public park lands with a riverfront park and promenade, which will all connect with this section of the trail. A unique feature of this section will be another pedestrian bridge constructed with a 90-foot railroad flatcar. 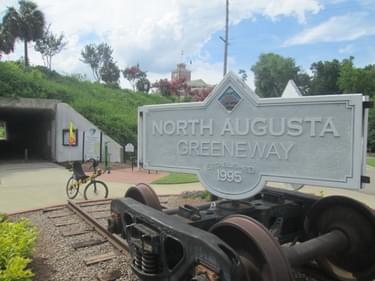 Parking and access to the Greeneway is provided at four locations, while other connections are available through adjacent neighborhoods and parks. The Greeneway is open to the public every day from dawn to dusk and is ADA accessible.

Plans include continued growth of the trail and additional connections with neighborhoods, parks, and schools throughout the community. Plans also call for a connection between the Greeneway and the Augusta Canal National Heritage Area which runs parallel to the Greeneway on the Georgia side of the Savannah River.