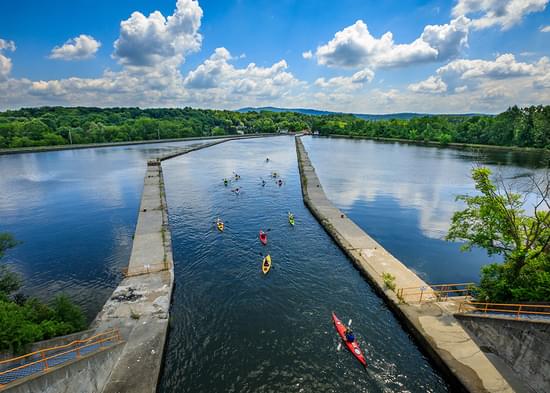 The NYS Canalway Water Trail is part of the NYS Canal System which has been in continuous operation since 1825, longer than any other constructed transportation system in North America. Since its opening, the canal has been enlarged three times to accommodate more traffic and larger vessels. The system is managed and operated by the NYS Canal Corporation, a subsidiary of the New York Power Authority.

In celebration of Great Outdoors Month, the New York State Canal System, including the Erie, Champlain, Oswego, and Cayuga-Seneca canals, received special recognition from the U.S. Department of the Interior as one of the nation's newly designated National Water Trails. “The New York State Canalway Water Trail is a national treasure that provides a unique paddling experience. This honor brings significant recognition to the work that has been accomplished to make the NYS Canal System a welcome and safe destination for paddlers--from signage to launch sites to amenities and visitor information,” said Bob Radliff, Executive Director of the Erie Canalway National Heritage Corridor. State Parks Commissioner Erik Kulleseid said, “New York State's trail network is unparalleled. This new designation recognizes the New York State Canal System as one of New York’s greatest recreational resources and will encourage both residents and visitors to get out and explore the state's extraordinary experiences, people, and places along our scenic and historic waterways."

The Water Trail is distinct from many other water trails since it is an engineered waterway and a historic canal. Paddlers and boaters navigate century-old locks, pass by historic stone aqueducts, paddle alongside tugboats and cruisers, and experience narrow flatwater stretches and wide river segments. Unique features such as 57 locks, 15 lift bridges, eight movable dams, guard gates, and powerhouses all regulate the flow of water and enable boats to transit changing elevations. Paddlers experience a diversity of birds and wildlife, unique geology, and varying terrain. The waterway offers a mix of urban, suburban, pastoral, natural, and industrial settings. While canal technology remains the same, its use has evolved from commercial to recreational and Water Trail usage has adapted with the times.

Erie Canalway National Heritage Corridor has taken a leadership role in developing the Water Trail and programs to create connections to diverse communities and promote education, health and fitness, tourism, and economic development. Through Erie Canalway programs such as the Water Trail Stewardship, Canalway Challenge, Ticket to Ride, and resources such as guidebooks and maps, websites, a Facebook group, and paddling events, the Water Trail is experiencing growth and new audiences.

The Water Trail Stewardship Program was launched in May 2021. The first-year goal was to have 10 adopted sections or approximately 100 miles adopted. Erie Canalway surpassed that goal and has 23 sections adopted by over 40 active volunteers. Volunteers range from ages 15 to 75, represent individuals, families, and groups, and bring a variety of experiences and skills. Their roles include maintaining launch sites on shore and in the water, acting as ambassadors, and communicating about conditions and issues on the trail.

Canalway Challenge is a free program developed to encourage visitors to the NYS Canalway Water Trail and Canalway Trail. Participants can sign up for a personal mileage goal, track their miles while paddling, running, walking, or cycling, and discover all there is to do along New York’s canals. Trip itineraries, Hot on the Trail (things to see and do), and Best Bet Paddling trips are additional resources for challenge participants.

Through Erie Canalway’s leadership, 450 miles of the NYS Canal System was designated a National Historic Landmark Historic District in 2016. The designation specifically recognizes the canal for its role in shaping the American economy and settlement, as an embodiment of the Progressive Era emphasis on public works, and as a nationally significant work of early 20th-century engineering and construction. The NYS Canal System is remarkable in its span, scope, and historical integrity. Historically, the Erie Canal has been a significant commercial and cultural driver throughout Upstate New York. The canal system continues to contribute to New York’s sense of place and serve as an economic generator.