Two Mules a Day Keeps the Back Pain Away 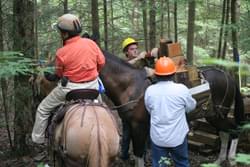 Historically, pack animals have been instrumental in blazing trails and helping pioneers migrate and settle all across the state of Kentucky. More recently, during a groundbreaking effort between horsemen and women, hikers, and Daniel Boone National Forest Service personnel, supplies to improve a section of the Sheltowee Trace National Recreation Trail were moved by two mules and a dozen workers to a site near Bark Camp Creek.

Organized by the Sheltowee Trace Association director, Steve Barbour, and President of the Kentucky Back Country Horsemen, Edith Conyers, the all-day project was both exhausting and exhilarating for all who participated. According to U.S. Forest Service employee, Tom Kean, this was the first such collaborative effort he knew about in his 27 years with the London Ranger District, coordinating diverse user groups of the trail with pack animals to accomplish strenuous physical work.

Participants in the group included volunteers from The Sheltowee Trace Association (STA), the Kentucky Horse Council (KYHC), Kentucky Back Country Horsemen (KYBCH)), summer hires from the Youth & Adult Conservation Corp (YACC), and national forest employees. One participant, Jeanette Mathern, who is both a hiker and horseback rider, member of the STA and various horseback riding organizations, said “I loved seeing all the different groups working together: Horseback riders, hikers, the High School and college aged YACC hires, and the Forest Service. Our forests, after all, are communally owned property. It showed how we can get out together and enjoy taking responsibility for the forest’s care.”

The task for the day included moving 200 pieces of pressure-treated lumber about 2000 ft. down the trail over rough terrain and a narrow tread that became more challenging with two downpours during the day. Two pack mules-- “Friday” a 10 year old veteran, and “Roger Rabbit” a 6 year old in training – were engaged and directed by their owner, Edith Conyers. An avid participant in nationwide equestrian adventures, Conyers rode one of her mules and led the other behind with pannier packs draped over its back to carry carefully balanced timbers on each side. 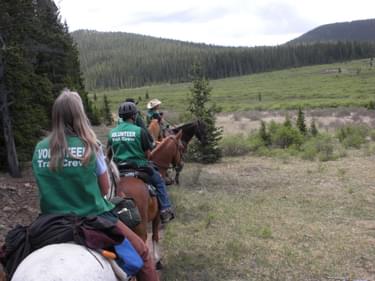 It was estimated the pack mule carried 170 pounds each time it traversed the route to the drop off point near Bark Creek. Two waiting volunteers unloaded the packs before strategically tossing the lumber in bucket-brigade style down to the creek crossing where two more helpers picked them up to carry over boulders to a sandy bank on the other side of the broad creek. From there, YACC youth carted the lumber to a point where a long set of steps is planned at a steep embankment for a Sheltowee Trace trail re-route.

The round-trip by mule took an estimated 20 minutes each time, so by the time the mule’s packs were ready to unload again, the hard working volunteers and summer YACC hires were at their posts ready to receive and move the next round of timbers.

If there was any waiting, the group shared stories near the cool waters of Bark Creek to pass the time. High temperatures for the day were interspersed with a downpour or two, refreshing workers during their efforts. About ten trips finally moved half of the supply mound by the end of the day. One volunteer, a trail-runner from Vermont, who was visiting a KYBCH couple working at the site, insisted on “hoofing it” up and down the trail himself, utilizing his athleticism to transport sacks of nails and timbers, often two to three at a time, on foot.

By anyone’s description, the project for the day was not only a good workout, but a great time to meet new people and reconnect with like-minded friends of the trail. As Kean concluded: “All in all, working with Edith, her mules, the volunteers, and our own Forest Service personnel was one of the more interesting and enjoyable days I’ve had lately.”

According to Steve Barbour of the Sheltowee Trace Association, another day is already being planned to move the remaining lumber so construction of the new trail staircase near the Bark Camp Creek crossing can begin. Edith Conyers, pleased with her mules’ performance, says she, Roger Rabbit and Friday can hardly wait! 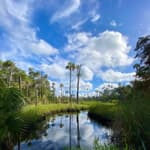