The trail is located on the Pondicherry Division of the Silvio O. Conte National Wildlife Refuge and is universally accessible. It includes a 900 foot long raised boardwalk with rest stops that offer extraordinary views of a boreal forest and wetland communities. 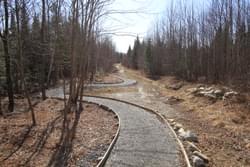 The Mud Pond Trail was constructed by the Youth Conservation Corps, US Fish and Wildlife Service staff and volunteers from the Friends of Pondicherry over a five summer period.

Visitors walk through an forest community uncommon to the Connecticut River Valley to a beautiful pond and fen deep within the refuge. The trail takes visitors, including those in strollers and wheelchairs on a unique raised boardwalk providing an experience unusual in New Hampshire. Benches allow visitors to sit and observe the wildlife, plant communities and scenery.

The trailhead was built on a restored log landing and some of the trail follows old logging roads that are being restored. The boardwalk portion is on older forests that have not been harvested for over a century. The trail is located in the White Mountains of New Hampshire where opportunities for wheelchair accessible trails in this mountainous region are limited. The trail is used by local residents, visitors staying at nearby resorts, school groups families with children in strollers, and people confined wheelchairs.

The US Fish and Wildlife Service acquired the land around Mud Pond in 2003. Much of the surrounding forest with the exception of the wetlands around Mud Pond had been cut over. The land was added to the Pondicherry National Wildlife Refuge. The Pondicherry was a well-known wildlife area and over 230 species of birds have been recorded here. The area has also been a popular location for hikers, naturalists and photographers. 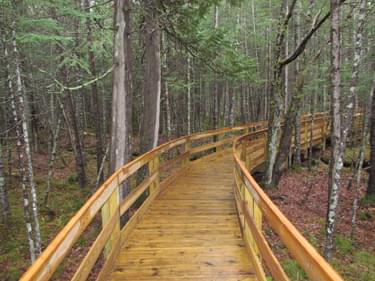 Boardwalk on the Mud Pond Trail on a rainy day

Andrew French of the US Fish and Wildlife Service is the Project Leader for this and other areas of the Silvio Conte National Wildlife Refuge. He has worked with closely with state agencies, New Hampshire Audubon, the Friends of Pondicherry and others to improve access for the public. He visited Mud Pond in late 2003 and recognized its potential for a universal access trail. He made the decision to propose the project and work with the local Friends group. It helps to have a visionary leader in charge.

David Govatski of the Friends of Pondicherry selected the location of the Mud Pond Trail in 2005-2006. He used aerial photos and many (over 60) site visits in all seasons and weather to determine the optimum location. The trailhead was formerly a log landing and the first part of the route was on a winter logging haul road. Much of the surrounding forest was cut over in the 1990’s and is now rapidly growing back into a young forest. For the boardwalk he consulted with botanists, wildlife biologists and soil scientists on the trail route. The intent of the boardwalk was to allow people, including those in wheel chairs, to visit a rare natural community safely and without disturbing the sensitive plants found there.

The staff of the Silvio O. Conte National Wildlife Refuge (USFWS) reviewed and approved the location of the proposed trail and boardwalk. The USFWS then presented the proposal to the public for comments. Following a positive review the USFWS then proceeded to get a wetlands permit through the NH Department of Environmental Services using a local firm of wetland scientists. The next step was working with the NH Trails Bureau, an agency in the Department of Resources and Economic Development. The project was selected for a matching grant and work began by the Northwoods Youth Conservation Corps in the summer of 2008 under crew leader Jenn Barton. 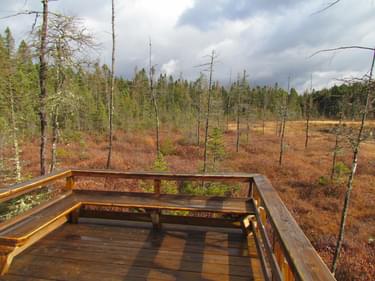 Jamie Savage of Jefferson designed the actual boardwalk. The design followed the requirements of the Americans with Disabilities Act (ADA) and wetland permit requirements of the NH Department of Environmental Services. The design allowed the boardwalk to avoid fragile plant communities and even trees and achieved a curvilinear approach that created a sense of mystery and excitement as one walked along the boardwalk.

The footpath coming down the hillside had unique difficulties due to a grade that was unsuitable for wheelchairs. Several switchbacks were required to achieve a suitable grade until the boardwalk arrived at the boardwalk. The wooden edging that was used was flexible and allowed the builders to create a curving trail that was pleasing to the eye.

The raised edging was required to keep wheel chairs on the trail. The surface of the trail is a layer of crushed rock called ledge pack over a layer of bank run fill. The ledge pack has sharp angular edges that after compaction hold together very well. A small amount of Portland cement was mixed in with the ledge pack to create a better bind between particles. This is particularly important for electric wheelchairs that have a fairly heavy surface pressure.

Local high school students working with the Northwoods Youth Conservation Corps largely did the physical work. Jenn Barton of Jefferson was the crew leader the first summer followed by Reuben Rajala of Gorham for the last four summers. The Youth Conservation Corps employs young adults aged 15-18 to work on natural resource conservation projects during their summer break. Youth unemployment is high in the North Country and this program is a much sought after summer job.