Models for Equine-Based Use of State Fish & Wildlife Lands

In June of 2009 the Equestrian Land Conservation Resource examined three models—New Jersey, Pennsylvania and New Mexico—for equine-based use and enjoyment of state game lands (commonly known as Wildlife Management Areas or WMAs) and formulated general recommendations for horsemen in other states seeking access to the same. 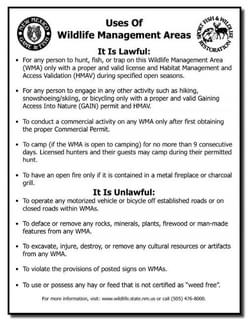 Equine Use of Fish Wildlife Lands

The Equestrian Land Conservation Resource was approached by one of its member organizations for assistance in finding ways to improve and formalize the relationship between the equestrian trail community and the fish and game agency in that state. In that particular state, equine-based activities are excluded from most fish and game lands (commonly known as Wildlife Management Areas or WMAs) and precariously allowed on certain WMAs under terms that are not well defined. As a result, horsemen feel the agency does not recognize them as being legitimate users of game lands. The organization asked ELCR for examples of ways in which state fish and game agencies may formally permit equine-based use of WMAs and ways in which equestrians may, in turn, offer something of value to the agencies.

ELCR invited member organizations from across the country to help identify models for equine-based use and enjoyment of game lands. Prior research had established that in at least some states equines are summarily excluded from WMAs as a matter of policy. Three programs stood out as particularly interesting models: 1) New Jersey, where the game agency sells horseback riding permits for use on designated WMAs; 2) Pennsylvania, where there are designated trails for non-motorized use, including horse use, on game lands and where the game agency accepts applications to add trails to the existing system; and 3) New Mexico, where access to wildlife on game lands by horseback riders is not only tolerated but encouraged through a legislative initiative.

The detailed findings from research and interviews of officials at fish and game agencies in these three states is provided in this document.

The Equestrian Land Conservation Resource (ELCR) is a national, not for profit organization whose mission is to advance the conservation of land for horse-related activity.