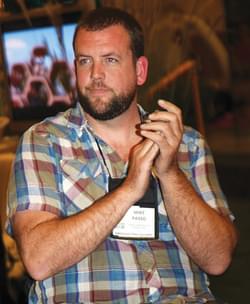 Some of you may already know of me, my name is Michael Passo, and I have served on the American Trails board for 16 years, and I have spent 10 years as executive director of the Professional TrailBuilders Association (PTBA).

I have known and worked with Pam Gluck since 1997. She leaves behind astonishingly large shoes to fill. I hope you will all join me in expressing our deep appreciation for Pam and her years of service to supporting and expanding our trail universe. I am humbled and honored to follow in Pam Gluck’s footsteps and to lead my favorite organization.

I am also excited and determined to bring the best of my experience and skills to American Trails’ future.
Nearly every significant event of my life has taken place on a trail. I had two orcas swim directly under my kayak on my favorite trail—the Cascade Marine Trail; I broke my back mountain biking the Lumberjack Trail in northern Wisconsin and began a new life as a person with paraplegia; I married the most capable and remarkable woman I have ever met on a remote beach on the Cascade Marine Trail (I told you it was my favorite!)

And indicatively, I began my career assessing trails for accessibility in Minnesota’s state parks and forests when Wilderness Inquiry took a chance on an awkward but excited young man. And now, 19 years later, AT has taken another chance on me to lead us into its bright future.

I believe that trails are imperative to our collective future, and that our organization, American Trails, is doing more than any other organization to develop and advance the full spectrum of trail opportunities. Throughout the world, via the International Trails Symposium and our burgeoning international influence, AT has a growing role in trail development, quality assurance, funding, and advocacy. 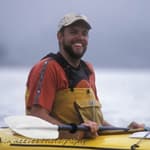 Mike Passo is the Executive Director of American Trails. Mike has also served as the Executive Director of the Professional Trailbuilders Association and the owner and operator of a sea kayak outfitter called Elakah Expeditions. Mike has led groups of all backgrounds, ages and abilities on sea kayak expeditions in the San Juan Islands of Washington, Vancouver Island in British Columbia, and in Glacier Bay, Alaska. Mike has conducted an extensive study of outdoor developed areas nationwide to determine the cost implications of construction according to proposed Americans with Disabilities Act standards, and a Congressional study on improving access to outdoor recreational activities on federal land. He has a B.S. in Recreation Resource Management from the University of Wisconsin—Madison, including three years’ coursework in Landscape Architecture and Civil Engineering. He has presented on Universal Design and Programming at several national conferences and served on the Board of Directors of American Trails since 2000. His love of the outdoors and his own paraplegia has given him a great interest in the creation of an accessible outdoor environment that does not ruin the characteristics and value of that environment.