This 30-mile section of the 193-mile Mason-Dixon Trail is a hiking trail that follows the lower Susquehanna River in York County, PA. There are beautiful views, deep ravines with waterfalls, and several big climbs and descents to where streams have carved out canyons in the river hills. 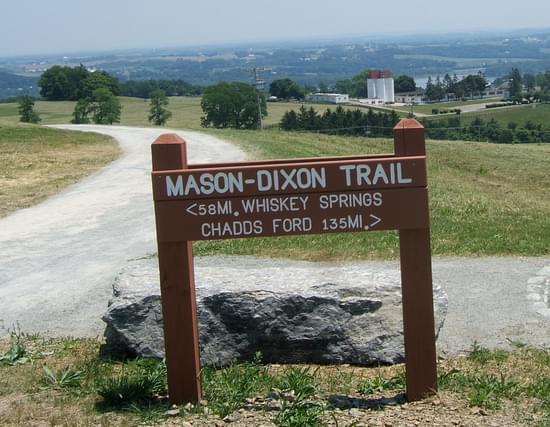 Mason-Dixon Trail (MDT) section receiving NRT recognition is a 30 mile-long hiking path, following the western slopes of the Susquehanna River Gorge between Wrightsville and Norman Wood Bridge (at PA Rt. 372). This blue blazed hiking trail rolls along river hillsides and drops into deep ravines while crossing a number of tributaries to the Susquehanna River. Along the way are an abundance of wild flowers, ferns, broad leafs and evergreens.

Rock formations, stream crossings and scenic overlooks add to the beautiful setting of the mile wide Susquehanna River valley. The area is habitat for many species, including bald eagles, osprey, white tail deer, wild turkey and is a stopping place for numerous migratory birds. The area is rich in history, including archeological evidence of native Americans, boundary disputes between American colonies and the construction and demise of a canal system.

This section of trail designated as a National Recreation Trail, is part of the larger MDT system, a 192-mile long hiking trail. The MDT connects with the Appalachian Trail at Whisky Springs to the west and the Brandywine Trail at Chads Ford to the east. A large loop can be made by going north on the Appalachian Trail to the Horse Shoe Trail, then back on the Brandywine Trail to the eastern terminus of the MDT. 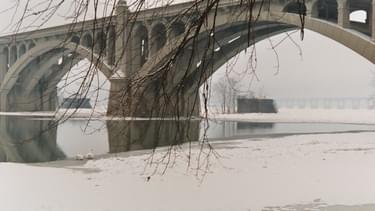 Starting in Wrightsville, the hiker finds a river town and site of a key Civil War event, the “Burning of the Columbia-Wrightsville Bridge”. In June 1863 the state militia destroyed the bridge to halt the advance of the Confederacy during the Gettysburg Campaign. Today the hiker can see two operating bridges. The older bridge, opened in 1930, was part of the Lincoln Highway between New York and San Francisco. The bridge is the longest concrete multiple arch bridge. A replacement bridge was built in 1972, the sixth bridge between the towns. Between 1840 and 1872, the Susquehanna and Tidewater canal operated along the river starting at Wrightsville and ending 45 miles to the south. The only double lock on the canal is located just south of Wrightsville. About 2 miles after leaving the bridge in Wrightsville, the trail climbs to the York Counties High Point Park with a 360 degree view of the river and both Lancaster and York County.

Between 1840 and 1872, the Susquehanna and Tidewater canal operated along the river starting at Wrightsville and ending 45 miles to the south. The only double lock on the canal is located just south of Wrightsville. About 2 miles after leaving the bridge in Wrightsville, the trail climbs to the York Counties High Point Park with a 360 degree view of the river and both Lancaster and York County.

After about 4 miles, the trial enters another beautiful park, which preserves a native lands site. The Lower Susquehanna River Valley was inhabited by an estimated 50,000 Susquehannock native people. Although not visible on the surface, evidence of their presence goes back 12,000 years. The last village dates back to 1550. Their site is identified is as Byrd-Leiphart and received National Historic Landmark status.

The trail descends to the river to an area known as Long Level. Because of boarder disputes between Pennsylvania and Maryland, 1867, British astronomers Charles Mason and Jeremiah Dixon conducted a survey, which fixed the boarder. This became known as the Mason-Dixon Line and is the namesake for the trail.

Looking toward the river, the hiker sees an area known as Conejohela Flats. This combination of small brushy islands and adjacent mud flats created by lower water levels controlled by the dam, is designated by Audubon as an Important Bird Area because it is one of the few reliable Pennsylvania sites for large numbers and a variety of shore birds.

At the lower end of Long Level the trail makes a steep climb and takes on a natural and rugged character. The path often climbs to a ridge, then drops to the river level to cross a stream. Safe Harbor Dam can be seen at about 15 miles. The trail passes through Apollo County Park, which is purposely left undeveloped. At about mile 19, Urey Overlook affords one of the best views of the river and beyond into Lancaster County. In another mile the trail continues through Otter Creek Campground where provisions can be purchased.

After some road walking, the trail enters State Game Lands and crosses beautiful Oakland Run at about mile 25. In 4 more miles the hiker comes to a viewing spot near the edge of the Holtwood Dam.

The area below the dam attracts fish eating birds. Look for osprey, eagles, and herons. Down river, the Norman Wood Bridge (Rt 372) can be seen. This is the end point for the section of the MDT designated as National Recreational Trail. Near the bridge, take time to visit the interpretive area showing restored Lock # 12, one of 28 locks on the Susquehanna and Tidewater canal. There is good parking in the area. The hiker could cross the bridge to pick-up the Conestoga Trail, which heads north along the river on the Lancaster County side, or continue on the MDT. 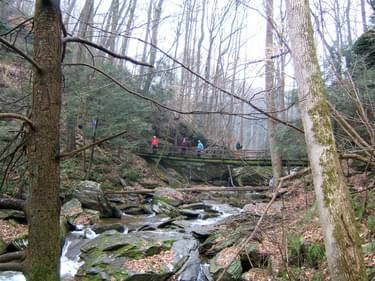 In addition to small group and individual hikes, organizations are taking advantage of the outstanding features of the trail for annual events. The Longest Day 100K Challenge was fist run in 2006. Attracting ultra-marathoners who start at daybreak in Maryland, the runners traverse the most rugged sections of the MDT, ending about dusk or later at Long Level. Keystone Trails Association selected the Lower Susquehanna River area for their Susquehanna Super Hike. Starting near Urey Overlook and going south on the MDT to the Norman Wood Bridge, across the bridge and north on the Conestoga Trail to the Pequea creek campground, the route covers about 26 miles. Hikers and runners familiar with the route and similar events have described the Super Hike as one of the most challenging events of its kind in the mid-Atlantic region (see Keystone Trails Assn. website).

Mason-Dixon Trail System website. The organization welcomes new volunteers and members. The M-DTS owns no land and wishes to thank the many private and public landowners who permit the trail to cross their property.

Maps for the entire MDT are available for purchase through sellers identified on the M-DTS website. Divided into 10 sections, the back of each section map provides a narrative of the hike with key turns, points of interest and mileages. The map sales along with membership dues are the primary sources of income for the M-DTS.