The Cross Florida Greenway retains many of the historical remnants of the former Cross Florida Barge Canal. A growing number of recreational and interpretive opportunities are available along the greenway. 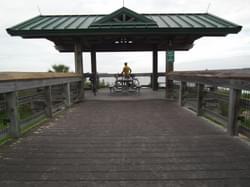 The western terminus of the trail at Withlacoochee Bay on the Gulf of Mexico; photo by Heather Nagy

The CFG supports a wider variety of outdoor public recreation uses than any other park and recreation land in Florida. Hunting, camping, fishing, boating, and other water-related activities are popular. There are many user access points for the more than 244 miles of trail, which are used for hiking, biking, and horse riding. The Florida National Scenic Trail coincides with the Greenway for about 36 miles.

The CFG traverses four distinct regions of the Florida peninsula: the Withlacoochee Lowlands, Ocala Uplands, Ocklawaha River Valley and Etoniah Basin. A wide variety of natural communities are present, including at least 14 natural community types. The CFG totals approximately 78,946 acres, of which about 8,000 acres are disturbed and 11,000 acres are water. These disturbed lands include some historically significant areas, including the canal land digging areas from the 1930s sea-level ship canal effort.

The CFG has an unusual land acquisition history. Most of the CFG lands were originally acquired for the purpose of constructing and operating a commercial shipping channel across the state. There were two major efforts to construct a canal across the Florida peninsula: the Gulf-Atlantic Ship Canal (1933 -1935), and the Cross Florida Barge Canal (1964-1990). Thousands of acres of land were acquired and millions of dollars were spent designing, engineering and building various segments of the project until it was halted by presidential order. In the 1970s, President Richard Nixon responded to protests and lawsuits filed against the project by stopping construction of the Canal.

The Cross Florida Barge Canal project was finally de-authorized by Congress in 1990 and all lands and structures were transferred to the State of Florida to be managed as a public Recreation and Conservation Area. In 1991 the Governor and Cabinet of the State of Florida signed a resolution agreeing to the terms of the Federal de-authorization bill, thereby officially de-authorizing the Cross Florida Barge Canal project.

This action ultimately led to the creation of the CFG State Recreation and Conservation Area. The CFG was officially renamed the Marjorie Harris Carr CFG in honor of the individual who led the fight to stop the Cross Florida Barge Canal project. Restrictions on lands acquired through the Barge Canal de-authorization differ from those on lands acquired with Preservation 2000 and Florida Forever funds.

Sustainable forestry is an important component of Florida’s economy and can provide funds for management of lands. The health of the forest ecosystem is paramount in importance. The silvicultural practices on the CFG, including harvesting, thinning, burning and reforestation, are exercised to establish a healthy forest with an age distribution that best duplicates natural conditions. Well-timed and executed timber harvests play an integral role by removing off-site trees to reestablish native species and thinning dense forest stands to improve under-story habitat, to allow less damaging prescribed burns and to improve forest health.

Future of the greenway

With its links to other existing and proposed public lands, the CFG is a key section of a much larger system of greenway corridors, including the Central Florida Loop. The Office of Greenways & Trails promotes efforts by local, state and federal governments, and water management districts to form partnerships and extend greenway and trail corridors throughout Florida.

Community-based partnerships are essential to the success of Florida's statewide greenways initiative. Greenways provide economic benefits to communities as well.

There are many local access points managed by a variety of agencies along the 100-mile corridor. Detailed maps are available for each section of the Greenway corridor at: www.dep.state.fl.us/gwt/