Extending from Hattiesburg to Prentiss, this 41-mile rail-trail offers a variety of natural features, opportunities for biking, hiking, and horseback riding, and provides economic benefits for local communities. 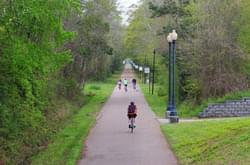 The Longleaf Trace Trail is constructed on an abandoned railroad right-of-way that runs between the towns of Hattiesburg and Prentiss. The route totals 41 miles in southern Mississippi, which makes it among the longest rail trails in America's Southeast. It goes through the small towns of Bassfiel, Sumrall, Bassfield, and Carson on the former Mississippi Central Railroad line.

The gently rolling trail is ten feet wide, paved with asphalt, and suitable for bicycling, inline skating, and all the family activities enjoyed on rails-to-trails projects. There is also an equestrian path which parallels the paved trail for 26 miles between Carson and Epley. The trail terminates on Fourth Street near the main University of Southern Mississippi campus in Hattiesburg. The Longleaf Trace was designated as a National Recreation Trail in 2004.

Local citizens, businesses, organizations, and communities came together to make the rails to trails conversion possible. Through donations, corporate sponsorship's, grants, and many other contributions, the trail corridor was saved intact. To manage the trail, in 1994 the “Pearl & Leaf Rivers Rails-to-Trails Recreational District” was established. 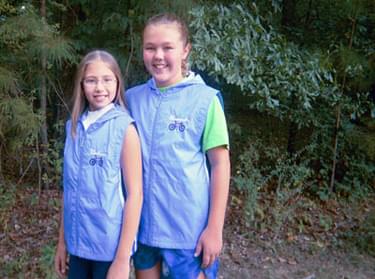 Melissa, left, and Hannah in their Trace Travelers vests

Fun on the trail

The two young girls at left formed the Trace Travelers bike club to participate in biking events, and ride the rail trail and in national parks just for fun. They have matching vests that are monogrammed and they purchase patches from every trail and park they ride, which are placed on the back of their vests.

They have traveled as far away as North Carolina but most frequently ride the Longleaf Trace National Recreation Trail that runs from Hattiesburg to Prentiss, Mississippi. When asked what they enjoy most about biking, their answer was, "we can have great fun with our families and friends and enjoy riding outdoors at the same time."

The Board of Directors for the Pearl and Leaf Rivers Rails to Trails Recreational District constructed a 120 foot tunnel to solve the problem of a hazardous intersection. Many old crossties and bridge timbers have been re-used to construct landscaping, rest areas, and rain shelters along the trail.

Eleven government agencies (along with financial support from the private sector and business community) have worked in partnership for 10 years. The governmental structure insures the funding and maintenance of the trail. Also unique is the state law that was passed allowing the formation of this (and future) rails to trails conversions.

Benefits of the trail

There are towns of under 500 population located on the trail which have benefited greatly from all demographics which use the trail.

The town of Bassfield, Mississippi advertisers itself as "The Village on the Trace" and notes the tremendous amount of effort that local residents have put into making the Longleaf Trace a success. The town's website states that "The Longleaf Trace is an environmental asset to our town. One of the things that we are proud of here in Bassfield is that our Village sits in the middle of the equestrian trail that runs from Carson to Epley. It offers you and your family the opportunity to enjoy a trip through nature's pristine settings and enjoy the splendor of Mississippi's outdoors."