The US Army Corps of Engineers manages the 19-mile interpretive trail on the west shore of Waco Lake, through Bottomland hardwoods, scrub, and grassland in central Texas. 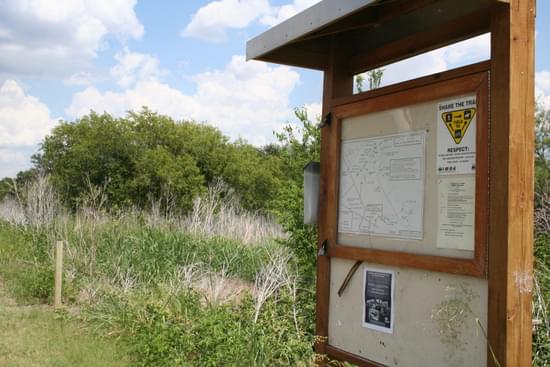 The 19 miles of trail now feature interpretive trail markers, directional maps at junctions, and picnic table access along the shoreline, and through Bottomland hardwoods, scrub, and grassland in central Texas. This is the only public interpretive trail in the region to offer signed access to horse riders, cyclists, bank fishermen and hikers between Fort Worth and Georgetown, Texas on the busy I-35 corridor. Additionally the trail’s smooth terrain offers novice users an easier trail than steeper, narrower trails in the area including the Cameron Park Trail system added to the National Trails in 2009.

Long-range plans call for expansion of the trail towards Reynolds Creek campground and the 1-mile interpretive trail within that park. Central Texas has a paucity of public land available for trails, and Lacy Point is situated within Waco city boundaries 10 miles from the diverse, growing urban city center.

Initially a campground closed in 1991 due to low use, the 7.1 miles of deteriorating roads through mixed grassland scrub with some bottomland hardwood sections are now maintained as larger trails with wagon capability accessible by emergency fire and police vehicles, off of which single-track trails split. Signs encourage visitors to stay on the trails, designate right of way, and other safe practices.

Much of the additional 12 miles of trail has been created in the bottomland hardwood area (a greatly reduced ecosystem in Texas), featuring year-round springs, old-growth Eastern Red Cedar, and much-needed shade from summer heat.

The trails are maintained through a partnership between the Corps of Engineers, Waco Bicycle Club (IMBA affiliate), and Texas Equestrian Trail Riders Association (TETRA). Interpretive sign posts were put in for an Eagle Project, and two other local scout projects have contributed expanding and enhancing the trail. More scout involvement is likely, but the majority of maintenance is done by TETRA and WBC volunteers at no cost.

Regarding wildlife, the trail is within viewing distance of the first documented pair of Southern Bald Eagles in Waco, and marks one of the westernmost expansions of this subspecies, listed by the state of Texas as Threatened. Among the other 200+ species of birds that have been observed are federally endangered migrant Interior Least Terns and the hybrid Black-crested/Tufted Titmouse, the latter found only in a narrow band between San Antonio and Oklahoma.

As the largest undeveloped zone on the wildlife corridor between State Highways 6 and 185, wildlife viewers can see deer herds, bobcats, foxes, armadillos, and 7 species of turtles.