Interview with Greg Harris of the Missouri Rock Island Trail

American Trails contributing author Josh Adams spoke with Greg Harris about the very exciting Rock Island Trail project. In 2019 the Rock Island Trail got a huge boost when a 144-mile corridor was donated to expand the trail. 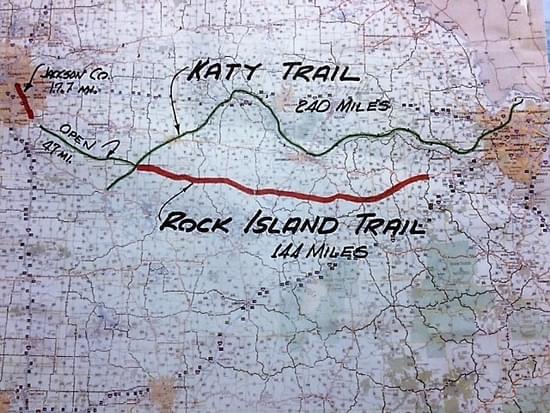 While I worked on the Missouri Trails Project, with Missouri Park and Recreation Association, I found many opportunities across Missouri during my travels to speak with trail agencies. I would attend conferences and meetings with these agencies in which I consistently met Greg Harris, Executive Director of Missouri Rock Island Trail (MoRIT). I decided to interview Greg after the 144 mile corridor was gifted by Ameren Electric Services Company and accepted as a project by Missouri State Parks, all in 2019.

Greg, tell us your history with MoRIT, where did it all begin?

I had been a volunteer for the 240 mile Katy Trail in the 1980's and was one of the co-founders of Ozark Greenways in Springfield, Missouri. I had helped get the rail-banking started for the 35 mile Frisco Highline Trail before moving to Rolla in 1995. In January 2015 I attended a public meeting where Missouri State Parks (MSP) officials announced they were considering a 191 mile rail-trail from Pleasant Hill to Beaufort along the corridor of the former Rock Island Railroad. That trail would connect the 240 mile Katy Trail to greater Kansas City and nearly create a loop at the other end near St. Louis. I joined the MoRIT Board of Directors in March and was hired as Executive Director on July 1. I had retired a few years earlier from Missouri University of Science & Technology where I had worked in major gifts and planned giving for 17 years. Prior to that I was Campaign Director for United Way of the Ozarks for a decade.

How did you feel when Ameren gifted the 144 mile section from Windsor to Beaufort, Missouri?

In September 2015, MSP asked that we gather our board of Directors and friends for a major announcement at the Katy Trail North Jefferson trailhead. We were overjoyed to hear construction was beginning on the first 47 miles of the Rock Island Trail which would be dedicated and opened in December 2016. That did happen on December 10, 2016. The project had been on hold for many years, but Governor Jay Nixon wanted to accomplish that during his tenure. Later that month Governor Nixon announced that the next 144 miles was being rail-banked.

Tell us about the process of Missouri State Parks accepting the gift from Ameren of the 144 mile corridor. How will Missouri benefit from this wonderful gift?

Everything stalled under the next governor, then a rail-banking agreement was signed in December 2019. MSP has until December 31, 2021 to fully close on the agreement (see attached white paper).

Once the RIT is complete while connected to the Katy Trail, would this become the longest rail to trail loop in the nation? 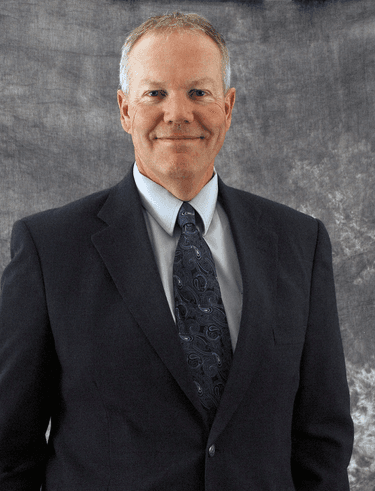 Tell us about the current sections of the RIT from Windsor to Pleasant Hill. How has this trail impacted Jackson County on continuing the trail into Kansas City?

Jackson County will complete a 14 mile Rock Island rail-trail segment from Lee's Summit to Kauffman Stadium at I-70 by early 2021. The half that has been completed is very busy. It crosses several other trails that will serve as feeder routes to the Katy/Rock Island trails across Missouri to greater St. Louis. They are leading a consortium to create a bike/ped friendly route from Lee's Summit to Pleasant Hill, a distance of about 8 miles.

Great Rivers Greenway in St. Louis could possibly connect the RIT to downtown St. Louis Missouri? What impact would this trail across Missouri become if that were to occur?

Great Rivers Greenway in St. Louis is quite interested in connecting the Rock Island to their trail network. The existing rail-banking agreement allows a trail alongside the active rail line an additional 13 miles to Union, Missouri. Just 8 miles north is Washington, Missouri where the new bridge over the Missouri River is bike/ped friendly. The Katy Trail is just 3 miles further.

It is mentioned in the analysis report, completed by the University of Missouri Extension that 41% of Missourians will live within 50 miles of the RIT. Tell us how this will impact Missouri tourism.

Tourism is Missouri's second largest industry, after agriculture. Trails become more of an international destination for adventure tourists the longer they are, when they have unusual features, abundant amenities, and other attractions. The 204 mile Rock Island Trail will be the fourth longest rail-trail in the nation, connected to the longest, the 240 mile Katy. It has 3 long tunnels and 3 long bridges. It runs through the middle of dozens of towns every 2-10 miles that have restaurants, parks, bars, wineries, breweries and at least one distillery. Visitors can get to Missouri by air, interstate highway and Amtrak. Attractions include everything in Kansas City, St. Louis and Lake of the Ozarks. Nearby is the nation's first National Scenic Riverway: the Current River and Jack's Fork rivers.

How do you think this will impact small trail towns across Missouri near the RIT considering many of them were built upon being connected to the railway as a way of life in the past?

The towns along the RIT are big enough to have services for trail users and small enough to place a high value on the added tourism the trail will bring. The RIT will be the biggest thing to happen to each town since the railroad itself.

When do you anticipate the trail being open to the public?

The timetable for the trail to open will depend on the vision of the trail manager. MSP has until December 31, 2021 to close on Ameren's multi-million dollar gift of the 144 mile corridor. If MSP does not close on the gift by that date MoRIT will work with Ameren to select another trail manager. The salvaged corridor resembles a gravel road. With minimal maintenance of vegetation, the corridor is suitable now for hiking, horseback riding and mountain biking between bridges and tunnels. Many of the towns every 2-10 miles have city parks with parking, water and toilets.

How can our readers participate in helping out with the progress of the RIT?

Those interested in the Rock Island Trail can follow progress at Facebook/morockislandtrail or learn more at www.rockislandtrail.org. If you or a group are interested in sponsoring a small bridge or other feature please contact me at [email protected] Check out the drone footage below of Gasconade River Bridge, one of the breathtaking features of the Rock Island Trail.

To learn more about features, funding, and other details of the Rock Island Trail check out the white paper here. 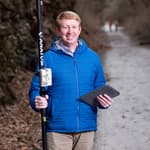 Josh Adams is a GIS Analyst who recently completed the Missouri Trails project through Missouri Park and Recreation Association. Josh has two bachelor degrees and several certifications in ArcGIS. He also earned the Eagle Scout award and enjoys many activities outdoors including biking the Katy Trail.