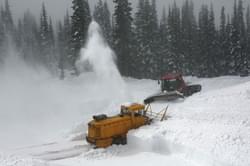 Spring clearing near the Methow Valley; photo by NPS

Spring clearing near the Methow Valley; photo by NPS

Now the proposals for a downhill ski resort appear dead, and the traditional economy based on ranching and logging is waning. Yet this beautiful valley, snuggled along the east side of the Cascades, boasts a thriving winter trade without the impact of an Aspen-sized resort. Some 170 kilometers of trails for cross-country skiers and mountain bikers connect the communities of Winthrop and Mazama and the Sun Mountain Lodge--one of the largest such trail networks in the country.

Serious commercial cross-country skiing started in the 1970s, when the Sun Mountain Lodge first began staying open in the winter, says Jay Lucas, executive director of the Methow Valley Sport Trails Association. Over time, other lodges developed trails for their winter guests. A few ambitious local residents decided it would be great if the trails were connected and the grooming regular.

So the first directors of the trails association re-mortgaged their houses to buy grooming equipment, Lucas says; the risk paid off when they were reimbursed by ski-pass receipts. "The bankers wouldn't talk to us. The local business community (not directly involved in cross-country skiing) lagged behind us." But people pitched in, including loggers who made it a point to build skidding roads to trail specifications.

The cross-country ski industry here took off when the Sun Mountain Lodge changed hands in the late 1980s. The Haub family, well-to-do Germans who adopted the valley when they began vacationing here in the 1950s, bought the lodge and supported the trails association. Among other help, the family put in a good word at the bank and "gave trail-based recreation legs to stand on," Lucas says.

The trails association also brought in experts from the Jackson Ski Touring Foundation in New Hampshire for advice. "They told us if we were lucky we'd have parking and toilets someday," Lucas says. Because money is still tight, such facilities remain inadequate.

And there are other problems related to money, including the high costs of maintaining grooming equipment. The trails association relies almost solely on revenue from winter ski passes to pay for trail grooming. A one-day pass costs $10, close to the price of a lift ticket at the small Loup Loup Ski Bowl east of Twisp in the Methow Valley.

Some 20,000 to 25,000 paying skiers come here each year, and use is growing by about 10 percent a year. About half as many mountain bikers pedal the trails in summer and their numbers are growing much faster. But the trails association hasn't yet devised a method for getting revenue from bikers.

Real estate ads that used to speculate on the downhill resort now boast about how property is near the trail system. There's an important lesson in that, says Maggie Coon, a co-founder of the Methow Valley Citizens Council, which fought the proposals for a downhill resort. "Instead of looking at grandiose projects to solve the economic woes of the valley," she says, "let's look at what's special in the Methow and build on that."

"The trails are so well-cared for that people here claim they aren't simply groomed, but buffed like the marbled entrance to the Waldorf Astoria. The trails transverse national forest, state, and private land, ranging from open meadows to dense timber and frequently offering stunning views."

The Methow Valley Southeast of Twisp, WA; taken from Rt. 153 (Photo: A. Balet)