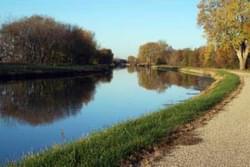 The Hennepin Canal Parkway is a linear corridor, roughly in the shape of an inverted “T” including a 66.3 mile east-west "mainline canal” and a 29.7 mile north-south “feeder canal.” The two corridors provide a total of 93.5 miles of bike trail, 172 miles of hiking and cross-country skiing trail, 90.9 miles of snowmobile trail, 73.6 miles of equestrian trail, and 95 miles open for canoeing. The Hennepin Canal Parkway represents a true multi-use trail system along a historic canal, which was the model for the Panama Canal.

Since 2000, a series of five Transportation Enhancement projects, totaling $17.5 million have been completed to construct a bike trail on the canal towpath. About two-thirds of the trail is an “A2” oil and chip surface, which will provide a surface hardness between asphalt and crushed limestone without any binder. In addition to the trail construction, the projects included stabilization of the canal’s banks, dredging the silted-in eastern section of the mainline canal, construction of aqueduct crossings, and construction of a bridge across the Green River.

The mainline canal forms a segment of the northern route of the American Discovery Trail through Illinois. It also is part of the 500-mile Grand Illinois Trail.

A project is in design to connect the Western end of the mainline canal, at Colona, through Carbon Cliff and Silvis, the 65-mile Great River Trail, in E. Moline. This connection is part of the GIT. The Great River Trail will be a segment of the Mississippi River Trail. Another project is in planning to connect the eastern end of the mainline canal, at Bureau Junction, through Depue, Spring Valley, and Peru to the I &M Canal State Trail at LaSalle.

This project will also be part of the GIT and ADT. At the northern end of the feeder canal in Rock Falls, the Sinnissippi Bridge, extending the Hennepin Feeder Canal across the Rock River. This extension connect the two communities of Rock Falls and Sterling, providing additional bicycle-pedestrian access and fishing and sightseeing opportunities. The Hennepin Canal Parkway State Park encompasses a wide variety of important natural and historic resources. The canal corridor is a greenway through the rolling agricultural land of western north central Illinois. Along the canal, nature has reclaimed the land, such as at Edford Praire.

The Hennepin Canal’s place in history is significant. The entire canal is on the National Register of Historic Places. the idea of constructing a canal to connect the Illinois and Mississippi Rivers dates back to 1834. Due to a lack of funds, Congress did not begin until 1890. The canal was completed in 1907, reducing the distance from Chicago to Rock Island by 419 miles.

However, by the time it was finished, the cost of shipping by rail had decreased and barge sizes and freight loads had increased making the Hennepin nearly obsolete. By the 1930s, it was primarily used for recreational traffic (it remained open to boat traffic until 1951).

The Hennepin Canal and its sister to the east, the Illinois & Michigan Canal, tied the Illinois, Des Plaines, and Mississippi Rivers together into a transportation network connecting Lake Michigan to the Gulf of Mexico.

The Hennepin Canal was the first American canal built of concrete without cut stone facings. Although it did not play a role in the region’s transportation system for long, its engineering innovations were significant. Construction of the Panama Canal borrowed techniques from the Hennepin.

The canal had 33 locks, with 32 still visible. Fourteen of the locks had Marshall gates, which are unique to the Hennepin. They are raised and lowered horizontally, like a rural mailbox. Five of the locks have been restored to working condition, although they are not used. The Hennepin Canal originally had nine aqueducts, with six remaining today.