The Greenway is a 3.5 mile pedestrian walkway and nature trail along the Hackensack River. 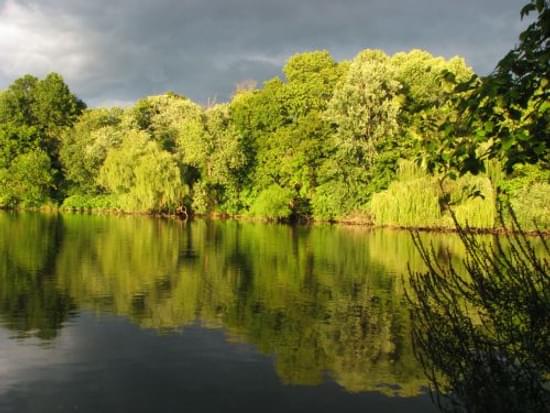 Situated within densely populated northeastern New Jersey, the Hackensack River Greenway’s peaceful riparian corridor forms the western boundary of Teaneck Township. While it is anchored by three parks, the Greenway’s pedestrian walkway and nature trail extend 3.5 miles through a variety of publicly and privately held properties.

Conservation efforts focus on creation and maintenance of a natural buffer between town development and the Hackensack River.

Education, conservation and recreation provide the core emphases for activities we run throughout all four seasons annually. Guided walks are led by knowledgeable members of the Friends as well as by expert birders, marine biologists, naturalists and area historians. They are variously geared to nature photographers, children and history buffs, as well as those who simply enjoy the serenity of the outdoors. In addition, several schools, local cub scouts troops and the regional chapter of the Audubon Society all use the Greenway as an outdoor classroom.

Access to the river provides an opportunity for young and old to learn about the ecology and human history of the Hackensack River, its beauty, and the important role it plays in all our lives.

The Friends of the Hackensack River Greenway through Teaneck, founded more than a decade ago, strives to inform and educate, thereby working to develop a community of environmentally aware citizens who will be advocates for a safe and clean Hackensack River.

Volunteers, from within our own ranks and cultivated through collaboration with area organizations, assist with conservation and protection efforts. These include maintaining no-mow areas adjacent to the river (where the Township stops mowing and natural succession is allowed to take place), controlling invasives, planting of native tree and shrub species, removing litter, and erecting and maintaining trail markers and bird nesting boxes.

New Jersey is well known for its critical location along the Atlantic Flyway, and we are proud that our relatively small stretch of land area and waterway provides habitat for migrating and resident ducks, herons, eagles, hawks and passerines. In addition, mammals such as Red Fox, Muskrats and Chipmunks to amphibians including Green Frogs make their homes within the wetlands and adjacent uplands of the Greenway.

Several historic and preserved homes line the Hackensack River Greenway, and in addition to the stately beauty they display they also help to tell the story of the area’s long history. General George Washington led his continental troops across the Hackensack River, on land now encompassing the Greenway, in their retreat following the November 1776 loss of Fort Washington. One colonial era home contains heavy iron shackles, evidence of the shameful practice of slavery.

Practically contiguous with the northernmost park along the Greenway (separated only by a narrow stretch of the Hackensack across which Washington and his troops retreated more than two and a quarter centuries ago) lies Historic New Bridge Landing State Park. Here one will find Steuben House, a revolutionary landmark and a gift from the newly formed United States to Major-General Baron von Steuben, Inspector-General of the Continental Army, as well as several other well preserved examples of Dutch Colonial architecture; all situated within a bucolic setting. Natural history and creation of the greenway

Settled continuously for thousands of years, the area of the Hackensack River and its watershed has sustained countless generations. The diminutive river of today, approximately only 50 miles long, was shaped by both natural and man-made forces. It was first carved out of bedrock by retreating ice sheets at the end of the last ice age. While its naturally meandering course constantly changed the topography of adjacent land, the river flowed clear for almost its entire length; with tidal activity at Newark Bay bringing seawater only a couple of miles upstream.

This millennia-old process changed with the completion of the Oradell dam in 1923. Created to provide an uninterrupted source of drinking water to the millions living within the watershed, the dam transformed the river below into a brackish tidal estuary. Though the dam changed the character of the lower Hackensack (the area in which our Greenway is located), protected land within the river corridor continues to support wildlife and recreation.

While National Recreation Trail designation seemed like the culmination of years of hard work, we know it was only one chapter in the story of the Greenway. In fact it was the vision of a group of concerned citizens coming together in the late 1990’s that proved to be the inspiration and impetus for all the good work that came afterward. These founders of the Friends of the Greenway familiarized themselves with the riverfront land, commissioned an environmental engineering study of the area, solicited support from Township government leaders, raised money and donated countless hours of labor in order to give an enduring gift to future generations of Teaneck residents.