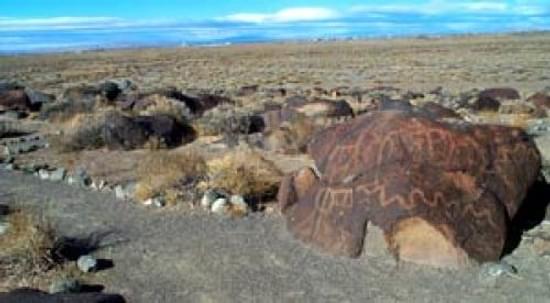 Grimes Point is one of the largest and most accessible petroglyph (rock art) sites in the United States. There are hundreds of boulders in this locality with petroglyphs inscribed in them. Designs include circles, wavy lines, human figures, snakes, and other animal figures. The rock art is believed to be about 6,000 years old. Visitors can view examples of petroglyphs along a short, self-guided interpretive trail. The site is managed by the Bureau of Land Management.

The Grimes Point Petroglyph Trail was constructed by the Youth Conservation Corps for the enjoyment of visitors and the protection of the cultural resources. Markers are placed at points of interest. Many of the petroglyphs are not marked, but can be viewed from the path.

Grimes Point was first visited by Native Americans 8,000 or more years ago. At that time the area was considerably different from the way it appears now. Up until the end of the Ice Age 10-12,000 years ago, a vast network of lakes covered much of Nevada and western Utah.

As ancient Lake Lahotan was drying up , its marshy remnants were home to a wide variety of plants and animals which were used by prehistoric populations. Imagine what the landscape looked like 8,000 years ago. Look at what is now a dry playa and imagine ia freshwater lake instead. Perhaps you would see ducks and other waterfowl. Along the shore you might expect to see a stand of cottonwood trees and extending out in the marshy zone might be a stand of tules, reeds, or cattails. In the nearby hills an occasional antelope might be spotted.

Archaeologists studying this area examine the clues left behind: bits of bone and shell discarded from a meal, a stone scraper used in butchering a small animal, and petroglyphs such as those along the trail. 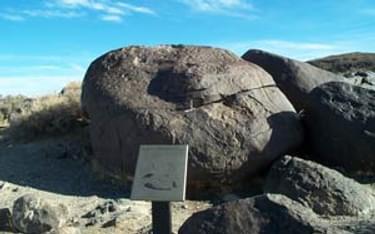 Patination on the surface of boulders along the interpretive trail

The boulders you see here are a deep chocolate grown in color, yet just underneath the surface the rocks are much lighter. This deepening of color on the surface, or patina formation, is the result of chemical changes in the rocks over time. When a petroglyph is made by etching into the rock surface, the newly exposed scar is lighter than the original surface. Over time these scars will patinate until they are eventually a dark as the orignal rock surface.

In much of the Great Basin, there seems to be an association of petrogolyphs and potential game trails. Quite frequently petroglyphs are found in a mountain pass that even today serves as a route for deer and antelope moving between summer and winter ranges. While Grimes Point is not located in a mountain pass, game animals would have been attracted to the water and plant life along the lakeshore long ago.

Anthropologists who have studied modern hunter-gatherer societies tell us that many of these groups have a ritual leader called a shaman. During the hunt, the shaman is called on to perform rituals to insure success. Many archaeologists believe that the petroglyphs here and elsewhere in the Great Basin are related to ritual practices of the shaman.

We may never know the exact meaning of rock art or the intent of the people who created it. But thousands of years later, we continue to be intrigued by these rock engravings. Remember that all objects of antiquity are protected by state and federal laws.