Results of discussion on trails along golf courses by a variety of trail managers. (2002-2005) 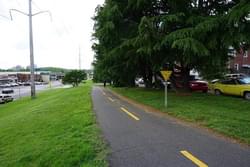 The City of Grand Forks and Corps of Engineers are in the process of building a multi use trail near a public golf course (9 holes). The Grand Forks Greenway Trail is riverward of the course getting as close as 50 ft. to one of the tee boxes. Segments of the trail through the course have been built but it isn't officially open or connected to other completed sections. This 1/2 mile trail segment that is near the course will tie into about 20 miles of trail along the Red River in Grand Forks, ND and East Grand Forks, MN. There has been quite a bit of use from those that have just stumbled across this new section of trail. The trail was put in at the time of the downsizing of the course from 18 to 9 holes. This was the result of the construction of the Flood Protection Project in our community. We are not aware of any accidents or injuries as a result of the co-existence of the trail and bike path but had these concerns during the design. At the time we were designing, we debated placing a fence to protect the trail users and then referenced many other areas where this wasn't done and there weren't problems with trail users near the course. The golfers do not need to cross the trail any area although they do go up and over a earthen levee built by the Corps of Engineers. We are also not aware of an economic impact to the golf course as a result of the trail although the Park District has deemed the clubhouse as a trailhead and are excited about the use the trail will receive and bring by the course. They (Park District) haven't placed any vending near the trail they have discussed renting bikes out of their clubhouse.

From Carl Knoch, Director of Research and Development, Trail Facts (2005):

The York County (PA) Heritage Rail Trail Runs through the Regents Glen Golf Club (private club). Nine holes on each side of the trail. Golf cart crossing on the trail was granted for a $200,000 charitable contribution toward trail construction (some say we should have asked for more). The golf course was under construction at the same time that trail construction was in progress. The trail has been open for 6 years at the end of August 2005 and gets about 300,000 user visits annually. We have no evidence that the trail users have "disturbed" the golfers No accidents or injuries have been reported. Golf carts must yield to trail users. Stop signs are located on the golf cart path on either side of trail. Crossing is "one way" only. Golf course maintenance "gators" also cross the trail and occasionally travel up or down the trail. We are not aware of any positive or negative economic impacts occurring from the interaction of the trail and the golf course. This is a private golf "community" and home owners around the course are regular trail users.

The Snoqualmie Valley bike trail (King County, Washington state) runs through the Mt. Si golf course. There is no fence but I have never heard of any problems. The bike trail is the straight line running across the NW. Both the trail and the golf course are ridiculously scenic.

The Washington & Old Dominion Trail, Northern Virginia - This rail trail runs through a municipal golf course in the Town of Herndon and has one crossing used by the golfers and the course maintenance crew. The entrance road for their maintenance shop runs on trail property and is also shared by our horse trail users and golfers for a short distance.

The crossing is signed to have golfers and golf carts stop for trail traffic and there has only been one accident in 16 years. We have a good relationship with the course management, who are just as interested in safety as we are.

From Fran Gotcsik, Friends of the Genesee Valley Greenway (2002):

The Genesee Valley Greenway, western NY runs through the Triple Creek Golf Course in the town of Nunda. Part of the former rail bed was used as a cart path before the Greenway was developed. The putting green was also built on the rail bed before it became the Greenway trail. Now the trail detours around the putting green. As the trail was used as the cart path, the course was laid out so trail does not disturb the functioning of the course. There is a relatively thick hedgerow along the trail near the golf holes, which screens the course from the trail. It is fairly open by the putting green, which is next to the club house. The driving range is on the other side of the putting green but golfers have their back to and hit away from the trail.

We know of no incidents between golfers in carts and trail users and the detour around the putting green seems to be working well for everyone. However, right now this is not a heavily used section of trail. The golf course owner has been very cooperative and will allow trail users to use their restrooms is they ask. The golf course owner is one of our trail adopters also.

Public course on Alcosta Road. As you ride through the course, golfers andcarts yield to pedestrians and cyclists. They have also installed "cages" toride through. The trail is covered by a sort of awning or fencing, so that you won't get hit by an errant ball. I have been riding that part of the trail for about 8 years and have never had any problems or heard any complaints.

The Iron Horse trail does go through the San Ramon Royal Vista Golf Course. The paved trail is enclosed between fences with screening against golf balls. There are a couple of cross paths for golfers to use. The multi-use trail is open to walkers, skaters, cyclists, equestrians and people walking their donkeys and llamas. (Yes, I've seen both.)

On either side of the trail are high chain link fences. At some points, perhaps where it has been deemed to be at high risk of high flies, the fence even arches over the trail. There are also periodic openings for golfers to walk through. Whenever I've gone through there, both golfers and cyclists seem to be quite happily doing their thing without any animosity whatsoever.

There are entrances and exits and many people use it to ride their bikes through the golf course.

A number of trails along golf courses. One trail goes right across a course.

I have ridden by the golf course on the many times. While there is a chain link fence, its purpose is to keep the cyclists and other trail users from getting hit by errant golf balls. This appears to be a situation where there is absolutely no conflict at all.

It does run right next to a golf course for quite a distance and at close enough proximity to the greens that trail users could presumably "disturb" the golfers. The West Orange gets about 40,000 users per month; probably 2,500 per day on a weekend. Most of those users would pass between 8:00 a.m. and 5:00 p.m., so that means 2 to 4 trail users would pass every minute. I've heard of no complaints from the golfers.

(** Rhetorical question: why is it a baseball player can hit a ball coming at him, rising, falling or curving at 90 mph, with thousands of people screaming at him, yet a golfer needs silence to hit one that's sitting still at his feet?)

Road to club house, some bikes using the restrooms, snack bar, with cars too, the golfers cross.

small access road used by only a few bicyclists

We have one through the golf course in Bidwell Park. It's a road for most of its length and crosses a fairway, leading to a bike/ped/golf cart bridge over Big Chico Creek to a network of off road options. It gets a lot of use with minimal user conflicts.

Coronado, the island/peninsula city west of downtown San Diego, has a bike path along part of the perimeter of a golf course. Much of the path had to have a very high chain link fence to protect the bicyclists from golf balls. Interestingly enough the sidewalk along another section of the course does not have a fence.... poor peds.

Here in San Diego there is a bike path/route/trail that goes right by the golf course on Coronado Island near the trail terminus at the ferry landing. I think the trail is called the Silver Strand-- it's about 11 miles long and runs from Imperial Beach to Coronado. I've ridden adjacent to lots of golf courses in US & Canada & never seemed to be endangering or inconveniencing the golfers-- I was the one who had to look out for a wild shot bonking me on the head! I would think that as long as you weren't using the golf-cart roads there would be no problems

I don't know if the photos attached will help. They are aerials that show the proximity of a multi-purpose path to the fairways on a public golf course. You'll notice that there is also an airport next to the golf course. You may want to have your city staff call the Pompano Beach Recreation Dept. at (954) 786-7191. I have never heard of any problems between golfers and path users and I have been out to the path a couple times to help them correct some design problems.

We have lots of trails that go around golf courses, I don't know of any that go through. No pictures

Paved trail that winds around the golf course

Popular multiuse path through their golf course. At one point a short stretch of fence was erected to protect bikes/peds from golf balls. The fence, on one side of the path only, consists of typical 8-foot chain link with a curved chain-link attachment projecting perhaps a foot or two over the path. The upper portion of the fence is covered with a nylon mesh to keep errant golf balls from penetrating the chain links.

Trail between golf course and Capital City Freeway (formerly called Business I-80). Trail receives little use. Fences on both sides.

Immensely popular trail runs immediately adjacent to 9-hole course. Very high fence (20 feet+) with chicken wire to protect cyclists. Trail runs very near a couple of tees and greens. No reported problems between cyclists and golfers in over 25 years of use.