Johnson County, Kansas, manages the 17.5-mile trail which begins in Olathe and continues north through Lenexa and Shawnee. The scenic, multi-use route was one of the first major trail facilities completed in the Kansas City metropolitan area. 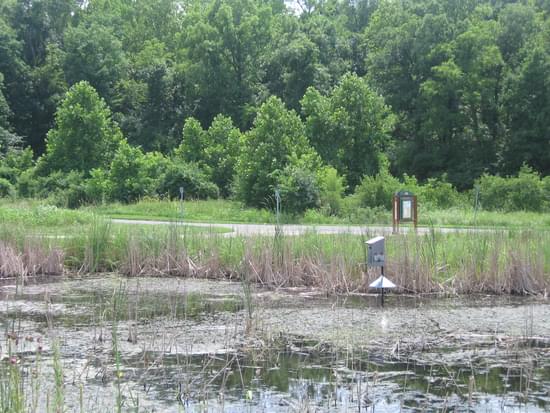 In 1980, the Johnson County Park and Recreation District (District) adopted a long-range plan that called for the preservation of land along several major streams in the county and to develop a linear park system in those preserve corridors.

In August 1986, the voters of Johnson County approved a one-half mil tax levy increase to fund the acquisition of land, development of a linear park system and maintenance of the system of trails along eight major streams. Mill Creek was selected as the pilot project to demonstrate the viability of such a system because it was adjacent to the largest park in the District’s system of parks and because it was at the suburban fringe, an area prime for development.

Over the next 13 years (1987 – 2000), District staff worked closely with local units of government to preserve land along Mill Creek and to develop a multi-use trail. The first phase was completed in the summer of 1988. This phase was built entirely on donated land from a local residential developer, county government and the City of Olathe. This group was honored at a well publicized and well attended trail opening ceremony.

Similar trail dedication ceremonies were held in 1990, 1992, 1994 and 1996 when subsequent phases of the trail were completed. At each of these events, the cooperation of developers and local units of government were emphasized and promoted to the media. This spirit of cooperation and pooling of resources with other agencies to expand the system became a mantra for the Streamway Parks System that continues today.

In 2000, following the completion of the final two phases of the 17-plus mile trail funded with assistance from the Intermodal Surface Transportation Efficiency Act (ISTEA), a community celebration was held recognizing the significant accomplishment of completing the longest continuous trail in Johnson County. The celebration was well attended by politicians, public servants and citizens demonstrating their appreciation for the facility. 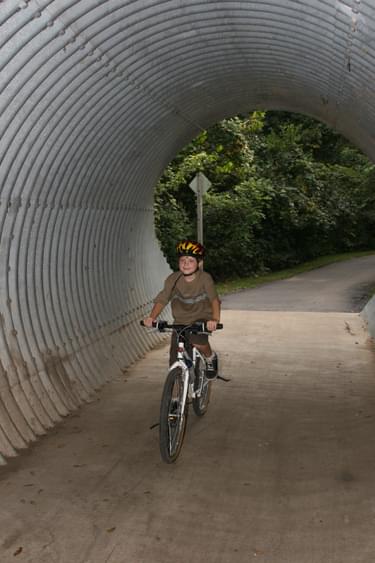 When the Streamway Parks System was first proposed in 1980, the trails and greenways were to act as the backbone of an inter-connected system of trails that connect residential units to places of employment, parks, schools, churches and shopping areas.

In order for this concept to become reality, local units of government were to adopt the plans developed by the District and to coordinate development surrounding the trail. This has definitely been the case with the three cities bisected by the Mill Creek Streamway Park. The Cities of Olathe, Lenexa, and Shawnee have all built trails linking into the larger valley and thereby connecting its residents to a lengthy system of trails, fulfilling the original mission of the plan.

The Mill Creek valley was an important lifeline for prehistoric tribes residing in the region and for those moving to the region. In the early 1830’s, as European settlers farther east forced tribal movements west into this “Indian Territory,” the Delaware, Shawnee, and Choctaw tribes were trans located here and facilities were built for their communities. A grist and sawmill was constructed in 1836 for local production of dimension lumber, wheat flour, and corn meal, that became the namesake of the stream.

Throughout the development process for the Mill Creek Streamway Park, local and statewide media and one national magazine have written articles about the trail and its development.

The ten-foot wide asphalt surface is continually undergoing improvements, supported by a maintenance crew of four that provide routine and on-going maintenance. The entire 17.5-mile facility is patrolled at least twice a week by maintenance staff and more often when maintenance activities are required. 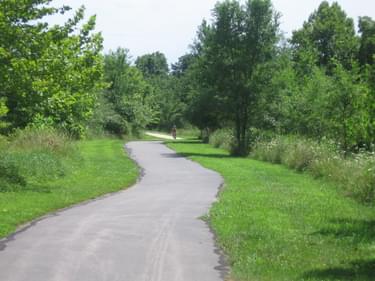 The District’s Park Police coordinate law enforcement activities with adjoining jurisdictions and emergency responders. In 2009, in association with the Mid-America Regional Council (MARC), the City of Lenexa, and the Johnson County Emergency Communications Department, an integrated system of address points on signage were installed to provide a more rapid response for first responders within the 911 system.

This was the creation of the Kansas City Regional Trail Safety Initiative which is intended to better service visitors to park and green spaces throughout Kansas City by providing better access to 9-1-1 service in undeveloped areas that lack typical street-grid-based addressing systems.

Pilot projects throughout the metro area are providing GPS-based reference points with address codes that are displayed on sign posts at key positions in parks and along trails. In the event of a need for Emergency Services, park patrons may communicate their location to the 9-1-1 dispatcher by sharing the unique identification number posted on the nearest 9-1-1 marker sign. This system will eventually be adopted and used by all local units of government on trail systems.

In 2001, following the retirement of a long-tenured Director of the District, the trail portion of the Mill Creek Streamway Park was re-named the Gary L. Haller Trail. This renaming was to honor over 27 years of service to the community and for the spirit and vision provided in the development of this system. This individual’s vision and leadership made the Streamway Parks a reality and to name the trail in his honor was a crowning achievement of his incredible career.