One of the busiest trails in the nation, this 47-mile multi-use rail-trail is seen as a green jewel in the midst of the state's most highly urbanized county. 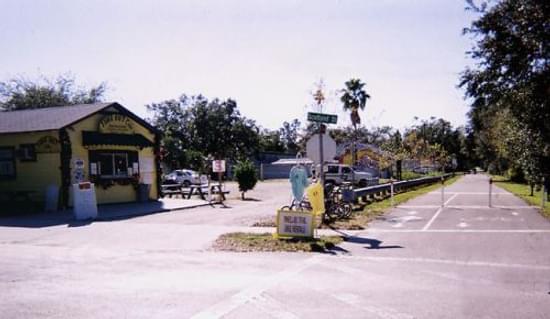 In 1883 a locomotive steam engine chugs through pine flat-woods, scrub-oak forests and along mangrove forests surrounded by warm Gulf of Mexico waters on a steel (commercial) trail in a remote west coast county in Florida. One hundred years later, a bicycle rider pants through the same forests surrounded by the same waters on a paved (recreational) trail in Florida's most densely populated urban county.

The trail consists of a 15-foot wide asphalt surface that is striped and marked to designate 10 feet for use as a bike/skate lane and 5 feet for the walking lane. Where space allows, the walking lane is separated from the bike lane by a grass median. This multiple use separation allows for safe trail use.

The Pinellas Trail runs 47 miles in Pinellas County and passes through passes through the historic downtowns of Dunedin, Tarpon Springs, and Palm Harbor. Connecting trails lead to a variety of local parks as well as to Honeymoon State Park. The Fred Marquis Pinellas Trail opened in 1990 with an initial 5-mile stretch. Plans are underway for an additional 20-mile extension along the abandoned railroad corridor.

The blueway is named for the Calusa Indians, who dominated South Florida for centuries before the arrival of the Spaniards in the early 16th century. The trail is perfect for every paddling adventure from short, novice-level trips to day-long or overnight trips. Anglers, bird watchers, nature photographers, day-trippers, families, archeology lovers and geocachers enjoy the blueway.

The entire Fred Marquis Pinellas Trail, including the overpasses, is accessible to wheelchair users and other persons with disabilities. Additionally, pedestrian overpasses were constructed over major road intersections throughout the county.

The overpasses provide pedestrian and trail user safety in crossing very heavily used roads (many in excess of 70,000 cars per day). The overpasses also reduce the impact on vehicular traffic by allowing the unrestricted movement of vehicles that would otherwise have to frequently stop to permit trail users to cross the road.

The Pinellas County Park Department partners with Pinellas Trails, Inc. to help provide amenities such as benches, covered shelters and water fountains on the trail. A wide variety of art also enhances the trail corridor.

Pinellas Trails, Inc. is a non-profit organization comprised of a group of citizens that support the Pinellas Trail and raise funds to purchase amenities for the trail. They also periodically provide funding for the purchase of trees to shade and landscape the trail. The Park Department also partners with a large number of volunteers that serve as Auxiliary Rangers on the trail.

The Pinellas Trail also features groves of live oaks hung with Spanish moss, tidal streams with wildlife, and quiet waterways for fishing. The average visitation on the trail since 1992 is 977,241 users per year.