A 250-mile water trail along the Fox and Wisconsin Rivers in Wisconsin, extending from the City of Green Bay to Portage and ending in Prairie du Chien at the confluence of the Wisconsin and Mississippi Rivers. 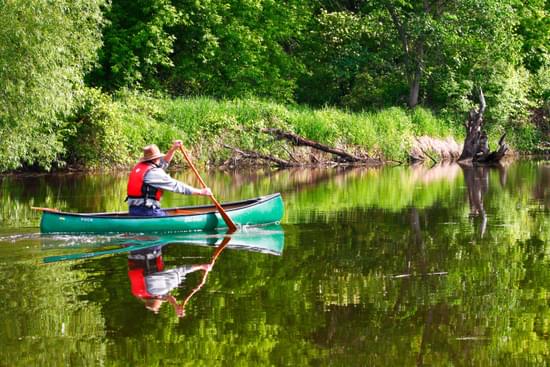 The Fox-Wisconsin Heritage Water Trail includes the Lower Fox, Upper Fox, and Lower Wisconsin rivers. It slices diagonally across the state for 280 miles from Green Bay in the northeast, through the City of Portage and on to the convergence of the Wisconsin with the Mississippi River in the southwest.

The water trail route was selected for its significance as the exploration route of Fr. Jacques Marquette and Louis Joliet. It encompasses 15 counties and more than 40 municipalities. The Fox-Wisconsin Heritage Parkway and National Recreation Trail are defined by a waterway, but also celebrate how two major rivers have shaped Wisconsin's journey through significant historical events, industrial breakthroughs, cultural advances, enjoyment of recreational riches and environmental recovery.

Approximately 250 miles of this route is considered suitable for water trail activities and paddling, although the entire route can be paddled if desired. Paddling conditions are generally easy and suitable for beginners with the exception of the Lower Fox, where extreme caution is advised near locks and dams.

Along the water trail, there are also two large lake crossings that can be paddled if desired, but have generally been excluded from the formal water trail route. This is due to the fact the lakes are not a river-way and can be quite challenging, especially in wind and wave conditions. The two lakes are Lake Winnebago on the Lower Fox River and Lake Wisconsin on the Lower Wisconsin River. Future critical review will be made as to the suitability of including these lake crossings in the formal water trail.

The area between Appleton and Green Bay is known as the Lower Fox River. The elevation drops an impressive 173 feet in approximately 30 miles. A system of locks, dams, and hydroelectric generation plants have “flattened” out the river to allow for boating traffic; however, in certain conditions non-motorized travel past these hazards can be extremely dangerous. Do not venture out unless accompanied by an experienced person along this portion of the water trail route.

Canoe/kayak landings, as well as portages have been built to support the water trail around many of the locks and dams. Signage has been installed with more trail signage and kiosks planned. Recently, a grant application was submitted in an effort to build a total of ten ADA accessible kayak landings. For the past 15 years, local paddling clubs have held public paddles and educational sessions along portions of the proposed water trail, and general interest is increasing. Other affiliated groups such as the organization Greenways are promoting biking and walking trails adjacent to the Water Trail.

In 2012, Economic Development Partners completed an Economic Impact Plan for the Fox Wisconsin Heritage Parkway. Results indicated that 71.2% of respondents are involved in outdoor recreation on a weekly or daily basis, with 89% of the participants having some form of post-secondary education and 60% having a household income of over $50,000. With outdoor recreation/silent sport enthusiasts spending an average of $50- 100 on each trip, Economic Development Partners estimated the annual economic impact of the current 1,148,000 baseline visitors to the Fox Wisconsin Heritage Parkway region would be 746 full time equivalent jobs that tend towards the tourism industry. Estimated labor income of $20,008,858 annually, would contribute $61,620,504 in Direct, Indirect and Induced sales from the visitors to the Region.