The Eastern Shore Trail is a varied surface trail for pedestrians and slow bikes that generally follows the shores of Mobile Bay in South Alabama for 22 miles. 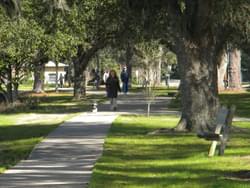 The Trail is a connector between North Daphne and Weeks Bay, built with support from the cities and towns it passes through. Some segments are sidewalks, parts are shared on-road, and other links are asphalt. The route roughly follows the eastern shore of Mobile Bay in Baldwin County, Alabama. The Baldwin County Trailblazers helped raise the funds for it, and now advocate for connectivity and work to improve pedestrian and cycling opportunities.

The northern end of the trail at Gator Boardwalk in Daphne, Ala., allows visitors a close look at alligators and giant turtles swimming below in d'Olive Creek or sunning themselves on its banks.

Many users choose to start their journey at Daphne's Village Point Park Preserve or at any number of locations in Fairhope where public parking options exist. Local residents who live near the trail, which connects neighborhoods, consider it an extension of their front porch and a convenient place to walk dogs or stroll or jog with friends. As the sun sets over the Bay, they gather along the trail in Fairhope to watch the beauty. 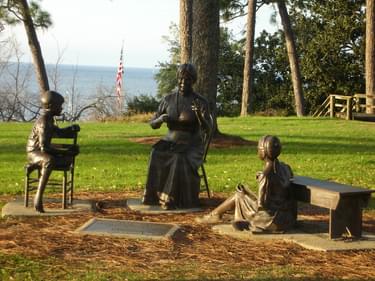 For visitors, Fairhope and Daphne downtowns have much to see and do, and farther south the renovated Grand Hotel Marriott Resort at Point Clear offers recreational options including two Robert Trent Jones golf courses. The grounds are a lovely oasis on a hot day and open to visitors.

The trail terminates near Weeks Bay, and efforts are underway to continue the trail east from that location.

From Mobile, Alabama, follow I-10 East to Daphne. From Pensacola, take I-10 West and then Exit 35 to Daphne/ Fairhope.