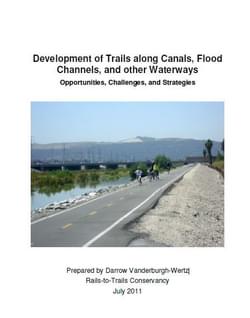 The linear, unbroken character of waterways provide opportunities for shared-use paths of significant length and importance. The 110-mile-long trail located on top of Herbert Hoover Dike surrounding Lake Okeechobee in Florida is a prime example of a levee trail. The Chesapeake and Ohio Canal Trail follows an old canal path along the Potomac River for 184.5 miles and is a fabulous recreational resource for the region. In the more urban environment of Santa Fe, New Mexico, the Arroyo de los Chamisos Trail, which runs along a cement-lined arroyo (wash), provides an important and direct pedestrian and bicyclist connection from densely populated residential neighborhoods into major commercial districts, schools, hospitals and other trails such as the Santa Fe Rail Trail. The Rio Hondo bicycle path in eastern Los Angeles County follows the Rio Hondo, a tributary of the Los Angeles River, and connects residents to schools, community centers, businesses, and regional trails on the San Gabriel and Los Angeles rivers.