A Conflict in outdoor recreation settings is best defined as "goal interference" attributed to another's behavior.

by Jim Murphy, Back Country Horsemen of America (BCHA) 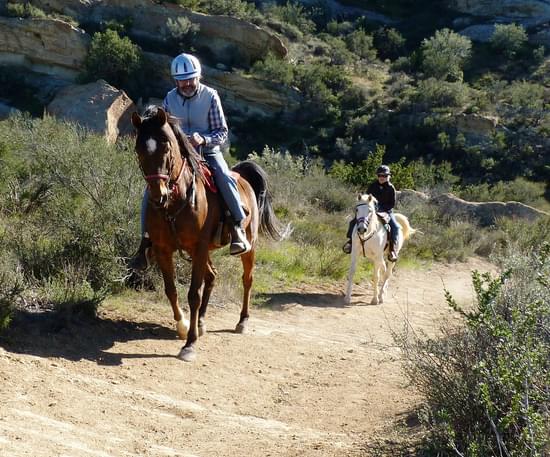 Trail conflict occurs: among different user groups, among different users within the same group, and as a result of factors not related to a users' trail activities. It is important to note that no actual contact among users need occur for conflict to be felt. Conflict may be related to: Activity style (mode of travel, level of technology, environmental dominance, etc.), focus of trip, expectations, attitudes toward and perceptions of the environment, level of tolerance for others, and different norms held by different users. Often one group resents another group but the reverse is not true.

How does design play a factor in increasing or causing conflict? Following are some examples. Again, remember that no actual contact among users need occur for conflict to be felt.

In California an agency recently completed a new trailhead facility. They are very proud of it but the users are not so proud. The facility is divided between a stock users area and a non-stock users area. Both areas are paved.

Now what is the first thing you do when you arrive at a trailhead after a long drive? You make a trip to the outhouse! What does a horse or mule do? About the same thing, it urinates on the ground. If it's gravel it makes a puddle and soaks in. Most stock users are sensitized to the control and clean up of manure at trailheads. But cleaning still leaves an unsightly area on pavement.

On pavement urine doesn't soak in as it would in a gravel lot, it runs off down-slope across the parking lot, perhaps under several cars and the bottom of someone's gear which is setting on the ground. The stock user doesn't like the situation, and of course the other user doesn't like it either. Paved trailheads make the control of manure and urine more difficult for stock users. Even when cleaned up properly wetness and stains remain. Conflict by design! The simple solution; don't pave the stock use area.

The conflict is the appearance of a large number of stock users and the abuse to the area. Conflict by design (or lack of design).

The situation at this particular facility is compounded because the non-stock users' area is the farthest from the start of the trail, so they must travel through the stock area to reach the trail. Stock users may have just unloaded and the manure not yet cleaned up. Stock may be packed up and the area congested, and stock may be nervous and easily spooked. Thus a safety situation and the possibility of conflict is introduced by design! The simple solution; provide a separate access trail so neither user will interfere with trailhead activities.

A boggy area on a trail is another example of a problem area. Because of the boggy area users spread out to try to avoid the bog. The result is lots of tracks which tend to indicate that a large number of users have used the trail. Because stock have four feet and the area is soft their tracks are dominant.

The conflict is the appearance of a large number of stock users and the abuse to the area. Conflict by design (or lack of design). The bog, and users trying to avoid the bog (especially stock) have increased user conflict.

If the bog were hardened with the use of a corduroy section or turn pike section with a barrier underlayment, there would not be an indication (exaggerated or real) of the presence of an excess number of users or abuse to the area. The result is less user conflict.

When recreational stock use is degrading a trail it means the design and construction of the trail is at fault. Abuse is often designed into the trail.

A study by a senior geologist with Simons Li and Associates, Fort Collins, Colorado, assisted by National Park Service Personnel has concluded that the intensity of use is not the controlling factor in trail stability and that stock use was not the single dominant process active on trails.

Trails degradation is also a function of landform, climactic and catastrophic events, and geomorphic process. If the design and construction is done correctly there will be little if any degradation.

The result is you won't know how much stock or other users have used the trail. By design a possible conflict is reduced.

Following are some other areas where attention is needed in the design and construction of those facilities:

Switchbacks: The opportunity to cut a switchback can be avoided by proper design and construction. Some of the best examples of well constructed switchbacks are rocked-in on the inside of the curve to reduce or prevent short cutting. The idea is to make it unattractive or undesirable to cut the switchback. Natural obstacles can be used and a simple log barrier is one of the best. The barrier needs to be long, perhaps thirty feet or more.

Access to water at trailheads and at lakes: Stock need water at trailheads and occasionally along a trail. Access at trailheads should be part of the plan and should be constructed and signed with no less attention than the trail itself. Watering stock at shallow lakes can make a negative impact but when that is the only water available, it will be used. Provide other watering areas if feasible such as an outlet creek. When other sources are not available then make a small area at the lake available for stock watering.

Campsites: At some locations in the Sierras permanent bear boxes have been installed for the storage of food and stock feed to prevent bears from obtaining this food source. While this may be a good ides, the location was not well thought out. The boxes are located at the same location as the stock containment area. This creates a conflict for hikers and stock users.

Opportunity for users to pass: In areas with higher use intensities, in areas closer to trailheads, and in areas where pack strings are often present, consideration should be given during trail design and planning to allow users to pass each other, especially pack strings. This can be done by constructing two-way trails at hard-to-pass locations, turnouts, or just an occasional wide spot.

Back Country Horsemen of America is an organization of recreational stock users committed to the perpetuation of the common sense use and enjoyment of horses in America's back country and Wilderness. Membership is drawn from a diverse geographical area ranging from rural to urban areas. Back Country Horsemen has organizations in 11 Western states with Alaska being the newest member state. Over 8,500 members are divided among 75 Chapters in these states. Educational programs include: Tread Lightly, Gentle Use, Back Country Etiquette and Minimum Impact Horse Camping. Service is a key componet of Back Country Horsemen philosophy with nearly one-million dollars of documented volunteer work on public lands in 1993.