Dale was known as the "Father of the Arizona Trail" and guiding spirit for the Arizona Trail Association. Dale had a vision of a continuous path across Arizona, and in 1985 he undertook a journey on foot across the state. 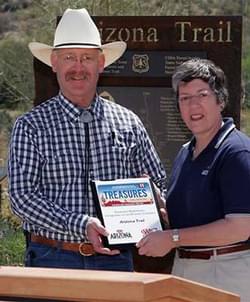 Dale Shewalter, known as the "Father of the Arizona Trail," and guiding spirit for the Arizona Trail Association (ATA), died on Sunday, January 10. Dale passed away, after a many year fight against cancer, in his hometown of Flagstaff, Arizona. According to the ATA, Dale had a vision of a continuous path across Arizona, and in 1985 he undertook a journey on foot across the state. Following that experience, Dale began sharing his trail idea throughout Arizona to many people and agencies.

An article in the Arizona Daily Sun noted that Dale "once quit work for a year and put perhaps 60,000 miles on his car in the 1980s to lobby landholding state and federal agencies for their approval."

The idea quickly took hold and within a few years the Arizona Trail idea was born. Today the 819 mile Arizona Trail is nearly complete and was congressionally designated a National Scenic Trail in 2009. Dale’s positive spirit, sense of cooperation and refusal to give up are still the Arizona Trail Association’s operating style.

The vision of a continuous border-to-border trail traversing Arizona's unique landscapes and historic areas had been on the minds of trail users through the years. One individual, however, took the dream and made it a reality. Dale Shewalter visualized a long-distance trail while hiking in the Santa Rita Mountains near Tucson in the 1970's.

In 2008 American Trails presented Dale Shewalter with the State Trail Advocacy Award for Arizona. The citation reads: "During the summer of 1985, Dale completed scouting the trail route. While walking from the Mexican border to the Utah border, he visualized and tentatively mapped an interlocking route of trail systems traversing the state from south to north. Beginning at the Mexican border, he projected a 750-mile route through desert and mountain corridors all the way to the Utah state line.

The concept of the Arizona Trail was born, offering opportunities for hikers, equestrians, mountain bicyclists, and cross-country skiers to experience the rich diversity Arizona has to offer.

Shewalter, during the next few years, began promoting his vision of a border-to-border trail to key state and federal agencies, service groups, corporations, and individuals. Much interest was evident. He proposed the Arizona Trail concept to the Arizona State Parks Board in 1985, gaining the support and enthusiasm of Larry Mutter, then State Trails Coordinator.

The Arizona Hiking and Equestrian Trails Committee (now known as Arizona State Committee on Trails or ASCOT), the citizen advisory committee to the Arizona State Parks Board, also endorsed the trail concept early on and have since been helping to coordinate the project."

Also in 2008, Dale Shewalter was honored by American Trails with the State Trail Worker Award. The citation reads: "As nearly 70 percent of the Arizona Trail is located on national forest lands, the implementation of the Trail made a significant leap forward when, in 1988, Shewalter became the first Arizona Trail Steward Coordinator under the sponsorship of the Kaibab National Forest. This Outdoor Recreation Planner position was made possible through funding from the Kaibab, Coronado, Tonto, and Coconino National Forests.

Dale has served continuously on the board since its creation, including a stint as President of the Board. He has spoken about the trail to numerous organizations. And he has continued to maintain and build the trail, with long service as a segment steward, as his health has allowed." 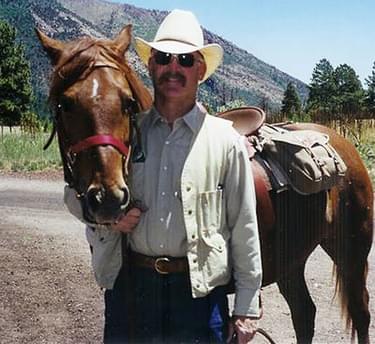 It’s the Arizona Trail
A path through the great Southwest
A diverse track through wood and stone
Your spirit it will test.

Some will push and pedal
And some will hike or run
Others will ride their horse or mule
What else could be more fun?

Oh, sure, you’ll sweat and blister
You’ll feel the miles each day
You’ll shiver at the loneliness
Your feet and seat will pay.

But you’ll see moonlight on the borderlands
You’ll see stars on the Mogollon
You’ll feel the warmth of winter sun
And be thrilled straight through to bone.

The aches and pains will fade away
You’ll feel renewed and whole
You’ll never be the same again
With Arizona in your soul.

Along the Arizona Trail
A reverence and peace you’ll know
Through deserts, canyons and mountains
From Utah to Old Mexico.