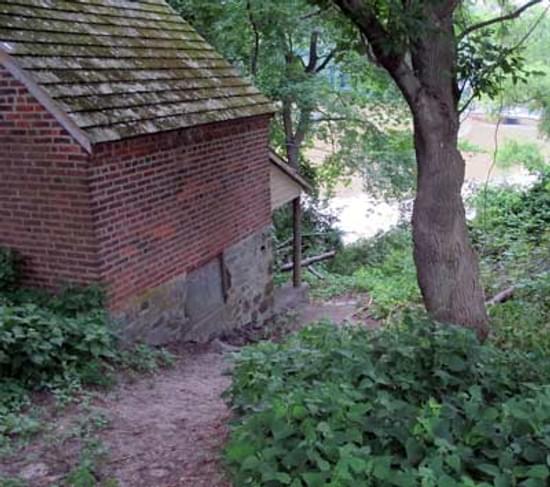 The network of six trails winds through different natural habitats including meadows, scrub-shrub, early successional forest and mature forest. Meadows and scrub-shrub habitats are important habitat types in short supply in the state of New Jersey as highlighted by the state’s Wildlife Action Plan.

The New Jersey Audubon selected the Croft Farm area as one of the stops on their state-wide Birding and Wildlife Viewing Trails. Signs indicating this recognition are posted at Croft Farm trailheads.

Habitat management techniques were used to help create some lengths of trail. A large border of land along the Borton Mill and Brace Roads were regularly mowed. The Cherry Hill Environmental Advisory Committee worked with the Mayor’s Office, Recreation Department and the Department of Public Works to reduce mowing in these areas. The technique promoted the development of meadow habitat along two Open Space borders.

By mowing along the wooded edge a trail was created taking trail users along meadow and early successional forest borders. Edges are good places to view birds and other wildlife. The creation of this trail along the edge allowed a linkage with a Cherry Hill trail system located across Brace Road, State Route 154. This trail system, called Borton Mill Trails are largely in place, but still under development.

Of the six trails, one is designated as the Croft Farm Nature Trail. Winding through mature forest and bordering Evans Pond, it features ten stops marked by wooden posts and brown aluminum signs showing a nature sticker and numbers one through ten. 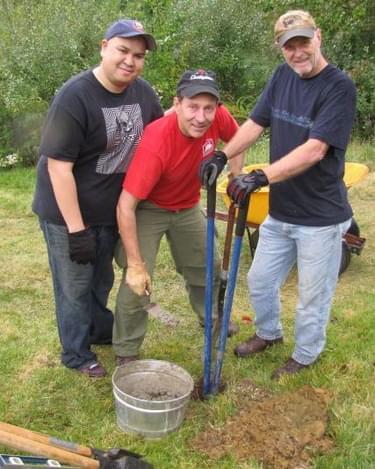 Installing signs along the trail system

The signs are attached with quarter inch bolts and countersunk to help avoid vandalism. The trailhead sign, 12” X 17”, has the same brown background with the trail’s name and a line to create separate space for appropriate stickers. The pattern of the trailhead sign is the same for the nature trail and the other trails in the Croft Farm Trail system. Below the line stickers show the following symbols, a nature trail, no motorized bikes, no ATVs, a hiker, and a directional arrow. A picture is attached. A solid metal trail guide box is mounted on a post next to the nature trail head sign post.

The nature trail guide interactively discusses soil, vegetation, trees, wildlife, wetlands, birds, decomposition, habitat, and biodiversity in a question and answer format. The answers are provided to promote use by families to better connect with nature. The last nature trail pamphlet entry challenges trail users to help improve the environment. The trail guide boxes are installed at each end of the trail so trail users can use the environmental education tool regardless of which end of the trail they enter first. The trail guide is attached to this application.

Croft Farm Trails provides the opportunity for community public service. Two Boy Scouts of America Eagle Scout candidates completed their Eagle Scout Project while improving the trails at this location. One project provided and installed all the posts for the Croft Farm Nature Trail. The second project erected a bridge over a stream that drains a wooded wetland on the property and feeds into Evans Pond. Cherry Hill Township’s Cherry Hill Environmental Advisory Committee coordinates the township’s activities for National Public Lands Day (NPLD). Croft Farm Trails was the location for public service in 2009 and 2010.

Croft Trail promotion is accomplished with CHEAC taking the lead in product development. After review and approval by the Recreation Department and Mayor’s Office, the trail layout, description, location, and key features are posted on the Cherry Hill website. CHEAC promotes trails at community events including the Cherry Hill Fall Festival at Croft Farm and the Cherry Hill Earth Day celebration at Croft Farm. Croft Farm Trails and other Cherry Hill trails are promoted at these events to connect people with nature, increase support for Open Space lands, and to highlight outdoor recreational opportunities in the community. 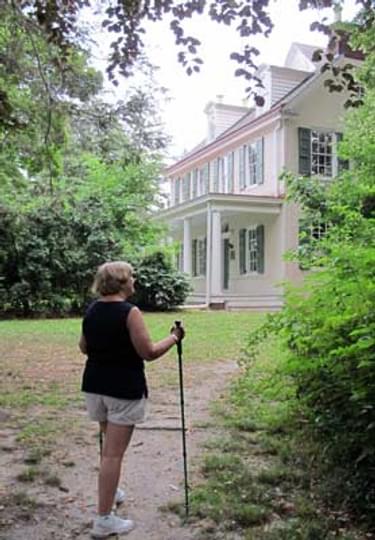 Once a working mill and farm and a stop on the Underground Railroad, today Croft Farm is a vibrant Arts Center and public open space site. The Croft site has played an important role in the growth of Southern New Jersey for more than 300 years. It is on both the New Jersey and National Register of Historic Places.

From 1697-1897, four different mills earned the Kay and Evans families their livelihood. People and supplies traveled along Cooper Creek to Croft Farm, then known by such names as the Free Lodge Mill, Springwell, and Edgewater.

The centerpiece of Croft Farm is the 16-room farmhouse. Built in several stages, the original section of the house was erected in 1753 by Issac Kay and exists today as the dining room.

British troop marched by the house as they departed Philadelphia in 1778 for New York City. The Continental Army under General George Washington intercepted them precipitating the battle of Monmouth.

It was reported by a descendant of Thomas Evans that Croft Farm "was one of the stations to which runaway slaves were brought. The slaves came from Woodbury and were received by Thomas Evans, then quickly hidden in the attic of the house so that no one could find them. Then, in the middle of the night, they would be given something to eat and hurried off in a covered wagon to Mount Holly, where they were received and hidden again." No one knows for sure how many people on the Underground Railroad were housed and fed at Croft Farm.

Records show that Josiah Evans arranged to purchase the freedom of two fugitive slaves, Joshua Sadler and Jefferson Fisher, rather than have them picked up by a bounty hunter. They remained at the mill, working to repay Evans for his kindness. Sadler went on to become the leader of a small settlement of freed slaves who established "Sadlertown" in what is now Haddon Township.

In the 1920s, with the once flourishing saw and grist mills no longer functioning, the Evans family sold the land to John W. Croft, Jr. who, along with assistant Thomas McCargo, farmed the land until 1981. In 1985, the Crofts sold the 80-acre property to Cherry Hill Township. In 1995, a new era began as the Cherry Hill Arts Center was dedicated on the grounds of Croft Farm. Croft Farm Trails were completed in 2010.