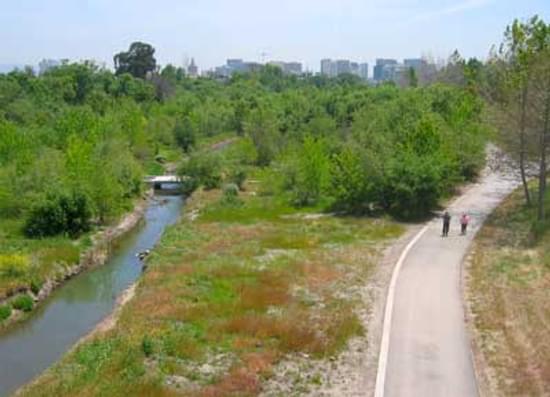 Trail along the Guadalupe River

Trail along the Guadalupe River

San Jose is a place of contradictions. It has all the attributes of a new city, but is in fact, California’s first city, founded in 1777. Silicon Valley’s latest discoveries come from San Jose and the region, but San Jose is also the site of the world’s first radio station offering regular broadcasts since 1909. It is an auto-centric place but has growing trail and bikeway network, used by over 38,000 individuals annually.

Developing San Jose’s bicycle infrastructure didn’t just happen. It has occurred piece by piece over the past decade. Today, bicyclists enjoy over 51 miles of trails and 150 miles of on-street bikeways. Not being comfortable with the status quo, San Jose’s Mayor and City Council adopted a Green Vision in 2007.

The vision seeks to make the city the epicenter of the Clean Tech economy. Ten goals are to be accomplished within 15 years. Once achieved, San Jose will have 100,000 more trees, use 50% less energy, illuminate its roads with LED streetlights and have a public fleet running entirely on renewable sources. Goal no. 10 sees completion of a 100-mile trail network to improve access to recreation and be an integral part of the overall transportation system.

Today, residents and visitors already enjoy many trail systems along rivers and creeks, through neighborhoods and within open space. Nearly 1,500 people enjoy jogging and exercising along the Los Gatos Creek Trail on any given Saturday. The Guadalupe River Trail’s proximity to Silicon Valley’s largest employers has it functioning as both a recreational and transportation resource. In September 2007, the City documented that nearly 1,000 people use the trail on weekdays and 58% report that they are commuting. 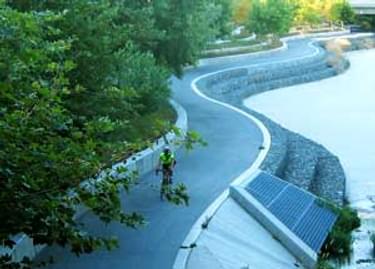 San Jose has a number of factors that make it ideal for recreation and active transportation. The city enjoys over 300 days of sunshine annually, has flat topography, and is crisscrossed by creeks and rivers offering space for shaded trail systems. The city and Silicon Valley in general has a casual work environment that permits casual attire, flexible work schedules and encourages alternative modes of travel. Major employers report that the City’s Trail Network already serves as a competitive advantage in attracting new talent and managing health care budgets.

Meeting the Green Vision trail goal requires the planning, design and construction of an additional 49 miles of trails. Unlike the first half of the network, the newer trail systems will need to travel through more constrained sites. Greater levels of coordination, funding and problem-solving will be required. A collaborative relationship with the Santa Clara Valley Water District facilitates development of many trails along waterways.

Past experience and a track record of well used and managed trails, makes discussions easier with other public agencies and private parties. Use of recycled materials and permeable surfaces plus a track record for sensitive trail development gives the city credibility as it presents its projects to the myriad of environment-oversight agencies with a role in permitting projects.

Plan your visit to San Jose by viewing the City’s Trail Program website. It offers plenty of maps, photos and other useful trail information. Your biking adventure in San Jose will take you from the San Francisco Bay, through downtown and its many cultural attractions and festivals, a 250-acre park in the heart of the city, delightful shopping districts and open space that recalls the area’s past when it was known as the “Valley of Heart’s Delight”. 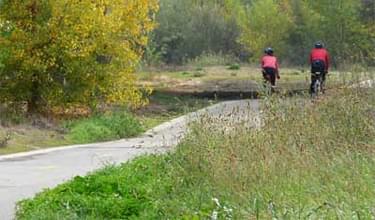 San Jose is also a great starting point for bike journeys to San Francisco, Monterey and other northern California destinations. After biking in San Jose, you may be left reflecting on how easy it is to enjoy a relaxing bike ride in a place so full of energy and change.