Eubanks Welcome Center along the Piedmont section of the trail.

The Chief Ladiga Trail was named for a Creek Indian leader who signed the Cusseta Treaty in 1832. Under the terms of that agreement, the Creeks gave up claim to their remaining lands in northeast Alabama. Because he had signed the treaty, Ladiga was allowed to select some land in Benton County for his wife and himself.

A year after the treaty, he sold part of his holdings for $2,000 to a group of speculators headed by Charles White Peters. That land later became Jacksonville. After selling the land, Ladiga and his wife moved to the Cherokee Nation and settled near what is now Piedmont. His cabin stood until about 1900, and he is buried in a grave near his homeplace.

Jacksonville, first called Drayton, was established in the early 1800’s on the site of Creek Indian Chief Ladiga’s trading post. In 1834 the town was renamed in honor of Andrew Jackson, seventh president of the United States. As first county seat of Calhoun County, Jacksonville remained the center of local government until 1899 when the county seat moved to Anniston. 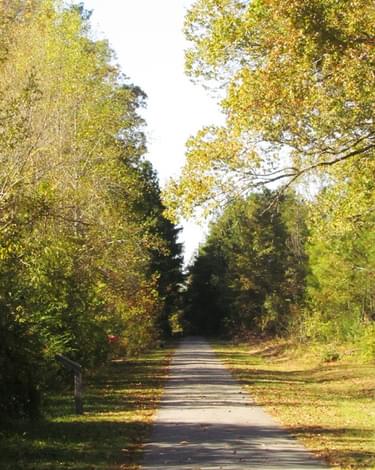 The Jacksonville Section of the Chief Ladiga Trail extends nine miles from Warren Drive (south) to intersection of the old CSX Railroad in Maxwellborn (north). The property was acquired by the City of Jacksonville from the Norfolk Southern Railway in 1996. The old train depot was recently restored and is now a support facility for city and trail-related events, as well as a rest stop for trail users.

The train depot was first opened on September 1, 1868, as a passenger and freight depot for the Selma, Rome and Dalton Railroad. Many attempts had been made to open the railroad during the War Between the States, but the war effort in the south severely limited the availability of iron for the rails. At the end of the war, the rail bed and bridges had been completed and as iron became available the rails were placed.

The newly constructed brick depot became a major stop for passengers and freight between New Orleans and the northern markets. Seen along the way are beautiful wetlands, streams, forests, farmlands, and a horizon filled with mountains. The Chief Ladiga Trail is a family oriented pathway that provides a safe, non-motorized way to travel, exercise and relax while enjoying the outdoors.

Just north of the town of Piedmont the Piedmont Section of the Chief Ladiga Trail intersects with the Pinhoti Trail which is a spur of the longest walking path in America, the famous Appalachian Trail.

On September 27, 2008 the "Chief" was connected to Georgia's Silver Comet Trail completing what is now considered to be the longest paved pedestrian pathway in America. Together the trails are 95 miles long with plans for future extensions and spurs.

The area now known as Piedmont, Alabama is a community that began in the early 1840's, located at the crossroads of two early post roads. Tradition has it that a hollow stump was used by the mailman to deposit and pick up the mail. This point received the official name of "Hollow Stump."