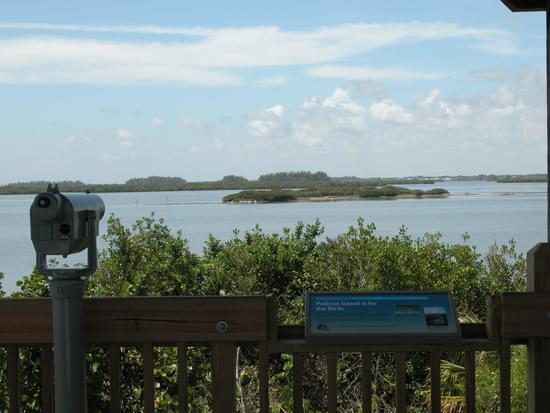 For its first 100 years, the only way to visit Pelican Island National Wildlife Refuge (PINWR) and see the Pelican Island rookery was by privately owned boat. On March 14, 2003, one-hundred years after President Theodore Roosevelt established Pelican Island, DOI Secretary Gale Norton and USFWS Director Steve Williams dedicated the Centennial Trail, opening the first public use facility at the oldest Refuge. The newly reopened Centennial Trail now gives visitors an opportunity to view the historic Pelican Island rookery and learn about the island's role in establishing our American system of lands for wildlife.

With accessibility as the number one concern in mind, the trail was constructed with eight-foot wide paths and at a grade leading up to the 18-foot observation tower of less than is required by accessibility standards.

The Centennial Trail is managed to provide the perfect self-guided experience using high quality materials and providing adequate parking, restrooms, educational kiosks, shelters, benches, interpretive waysides and brochure racks. During the busy season, the trail receives 250 visitors per day, some of which are repeat visitors, usually bringing their guests or visiting family with them.

Since its dedication and opening in 2003 The Centennial Trail has received avid support and promotion from the local Chambers of Commerce and other local tourist destinations.

The trail has become a unique opportunity for locals and tourists alike, for birdwatchers and wildlife photographers, and is a great discovery for travelers on our National Scenic Byway. Due to the popularity of The Centennial Trail, the Refuge has identified the need for a future Visitor Contact Station to provide orientation for visitors to the Refuge.

There are five benches, donated by the United States Postal Service, spaced throughout the length of the trail to provide adequate rest stops for the elderly. The benches are associated with a covered orientation kiosk overlooking a restored pond and butterfly garden, a covered shelter overlooking the pond and habitat restoration area, and a NWRS kiosk at the head of the boardwalk section of the trail.

The layout of the boardwalk was chosen to protect significant natural resources while providing interest with three relief turns and three wildlife observation platforms overlooking wetlands on the site.

The focal interpretive theme of the Centennial Trail revolves around the first 100 years of the National Wildlife Refuge System. One unique feature of the boardwalk is that every other plank has been engraved with the name, state and establishment year of each national wildlife refuge in the system. The planks are arranged in descending order of establishment with the concept that visitors walk the planks of time back through history culminating at the 18-foot observation tower overlooking Pelican Island.

The interpretive theme of the planks is continued by corresponding educational panels along the way. Four of the panels consist of custom art work featuring scenes of the birds of Pelican Island, the mammals of the Refuge, habitat restoration dioramas, and an aerial depiction of Pelican Island and surrounding islands.

Although most of the educational panels are of adult interest, these four wildlife panels were designed with the exploratory nature of kids in mind. The entire set of 20 educational panels at the site are some of the best quality seen on national wildlife refuges and at no other Refuge is there a facility that interprets the NWRS to this extent. The educational panels were funded by a National Fish and Wildlife Foundation grant in partnership with Wild Birds Unlimited, Pathways to Nature Program.

The parking areas, and hence the gated access to The Centennial Trail, are managed by Indian River County. The county mows the parking lot area, maintains the trees and shrubs, and opens and closes the gates to the Refuge daily. With a Refuge staff of only 4 and our office located 30 minutes south of the Refuge, the county partnership has been and will continue to be the most cost-effective management strategy for The Centennial Trail facility.

A large percentage of the construction costs for the trail were funded through partner grants. The use of high quality materials has kept repair and replacement needs very low. Other than checking on the facility on a regular basis and interacting with the visitors, the management costs of The Centennial Trail have been minimal to the Refuge.

The Refuge applied for several partner grants to fund the construction of the boardwalk and the USFWS made it their top Centennial priority. The USFWS provided staff from all around the county to help construct the boardwalk and provided the additional funds needed for the completion of the project. Funding partners for this project included: Indian River County, The National Fish and Wildlife Foundation, Wild Birds Unlimited, Pathways to Nature Program, ConocoPhillips, Florida Inland Navigation District, St Johns River Water Management District, Florida Power and Light, Pelican Island Preservation Society, and the United States Postal Service.