The route begins in Richmond, adjacent to the Whitewater Valley Gorge Park at the historic Gas Company Works building on U.S. 40 and extends northwest through Wayne County and the small towns of Webster, Williamsburg and Economy.

The trail continues through Losantville in Randolph County and Blountsville in Henry County and enters Delaware County near the southern end of Prairie Creek Reservoir and Park.

Bisecting the heart of Muncie, the trail crosses the White River and continues northwest to the town of Gaston. Between Gaston and Jonesboro in Grant County is a gap, a 11.3 mile section of abandoned rail corridor purchased buy landowners. A route(s) will be chosen using public roads to connect the two sections of Cardinal Greenway.

The Cardinal Greenway resumes in Jonesboro and overlooks the Mississinewa River and the western edge of Gas City. Continuing northwest, the trail extends all the way through Marion.

During 1994 Cardinal Greenway selected a design team which specifically addressed trail issues of management and planning strategy, site analysis, project development, and funding. A Master Plan was completed in early 1996 and final tracings were submitted to the Indiana Department of Transportation (INDOT). 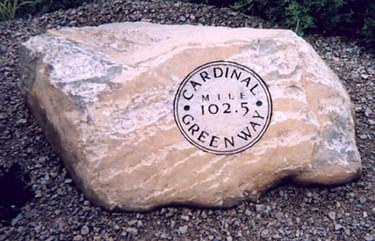 A ground breaking ceremony in September 1997 sets in motion the construction of 10 plus miles for the Phase 1 section of the Cardinal Greenway from the Wysor Street Depot in Muncie to County Road 534 East, southeast of Prairie Creek Reservoir.

Since that first ground breaking ceremony the trail has been extended from the Wysor Street Depot to the Town of Gaston north of Muncie. This provides the trail user with a total of 20 completed miles. The trail includes trail heads, rest areas, and interpretative signage. A variety of events, rides, and fundraisers are held each year on the Cardinal Greenway.