The Girdwood to Indian Pathway is a 13.3-mile paved trail that provides spectacular views as it parallels the Seward Highway along Turnagain Arm below the mountains. 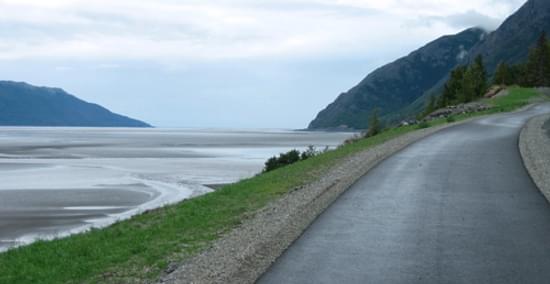 Mountains, glaciers, beluga whales, and ocean views are a few of the spectacular sights you can take in on the Girdwood to Indian Pathway. Known to locals as the "Bird to Gird" this trail was recently enlarged to include an extra six miles to Indian.

The now thirteen-mile pathway follows the Turnagain Arm next to the nationally designated Scenic Seward Highway. Most of the trail was built on the old highway alignment when the highway was moved closer to the ocean.

The entire trail is wheelchair accessible. Numerous rest stops with benches, educational features, and telescopes along the trail. Interpretive signs of geologic features, wildlife and avalanche mitigation line the trail.

Three communities, Girdwood, Bird, and Indian, are connected by this trail. Trails leave the main route and access each of the communities' own valley pathways. The trail also provides access to Bird Creek Campground and the Bird Point Scenic Overlook.

Through the spruce forest

Beginning near the intersection of the Seward and Alyeska highways, the path initially navigates through marshy tidewater turf populated by an ethereal forest of dead, skeletal trees. The demise of these trees is generally attributed to the infamous 9.2 magnitude earthquake of 1964, which allowed salty tidewater to flood the area and effectively poison the spruce to death. This area also supports abundant bird activity from mid-May through July.

The trail passes through the birch and spruce filled Bird creek campground allowing trail users to stop and spend the night if needed.

Parts of the trail are groomed for cross-country skiing in the winter by Alaska State Park Rangers. Bikers, hikers, dog walkers, skate skiers, and rollerbladers as well as many others enjoy the use of this trail.

As a resident and trail enthusiast, Vic thanked the project partners for this world-class trail and presented an NRT certificate and a surprise (an NPS bike jersey), to Jerry Lewanski, Director for the AK Division of Parks and Outdoor Recreation, Other key partners in the construction of this great new trail were the Federal Highway Administration, the AK Department of Transportation & Public Facilities, and the Department of Natural Resources. Park at the Bird Point rest stop just after the Bird Flats. From Anchorage, take the Seward Highway about 25 miles southeast. The rest stop is at mile 96.1. There is a day-use fee of $5 to park here. Parking at the Bird Ridge rest stop at mile 101 is free, but crossing the highway here can be hazardous.