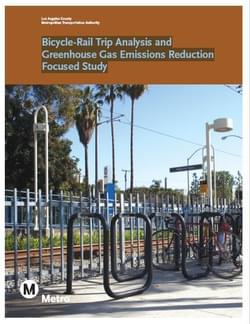 This focused study relies on bicycle trip data gathered by conducting intercept surveys of bicyclists at a subset of nineteen (19) Metro Rail stations. Counts and surveys were conducted during the weekday morning commute period (6 a.m. to 10 a.m.), the weekday evening commute period (4 p.m. to 8 p.m.) and the weekend midday period (10 a.m. to noon). Bicyclists were asked to report about the journey they were taking at that moment, from the origin to the final destination. Concurrently with the intercept surveys, volunteers recorded the total number of bicyclists entering and exiting each sampled station. Volunteers collected 605 usable surveys and counted 2,305 bicyclists at the 19 sampled stations.

Metro is unique among the nation’s transportation agencies. We serve as transportation planner and coordinator, designer, builder and operator for one of the country’s largest, most populous counties. More than 9.6 million people – nearly one-third of California’s residents – live, work and play within our 1,433-square-mile service area.