From Bureau of Land Management

This National Recreation Trail in Betty's Kitchen Wildlife and Interpretive Area invites vistors along the Colorado River at the California border. 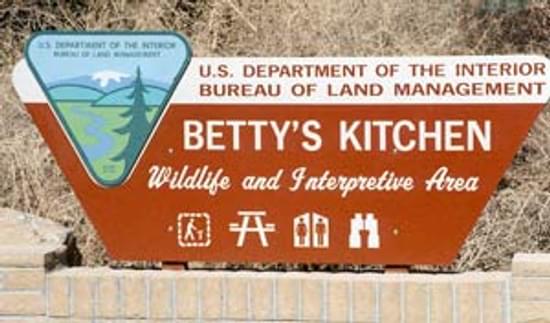 Recreation facilities include universally accessible picnic and parking areas, rest rooms, trailside benches, a fishing pier, walking bridge, and a self guided interpretive trail. Visitors can kick off their shoes while casting a line and fishing from the pier, pack a lunch or barbecue in the picnic area, or take a stroll along the interpretive trail. No matter what time of year, Betty's Kitchen promises visitors a glimpse at some of Arizona's wildlife including numerous mammals, birds, fish, and reptiles.

Kids learn about snakes from a BLM ranger

Betty's Kitchen Interpretive Trail is very unique because of the prehistoric and historic activities in the area. Early use of the Betty's Kitchen area probably began during the first millennium, A.D. Although no one has found prehistoric artifacts at Betty's Kitchen, the area was undoubtedly important to the local people in their search for food. Many of the native plants found in the area were a source of food and the terrace on which Betty's Kitchen sits is ideal for agriculture. Early agriculturalists were dependent on seasonal flooding to water their crops and archaeologists have assigned artifacts made by these prehistoric agriculturalists to the Patayan archeological complex which occurred from about 700 A.D. to 1850 A.D.

Historic activities in the vicinity of the Betty's Kitchen area began in the late 1850s when gold placer deposits were found along the east side of the Colorado River. Mining camps were established; however were short lived due to the discovery of gold veins located elsewhere along the river. In the latter part of the 19th century, small farm plots were established and the construction of Laguna Dam commenced bringing numerous homesteaders to the area.

A combination cafe and bar was established during the 1930s or 1940s known as "Betty's Kitchen" for Mrs. Betty Davidson who worked at the cafe. Betty's Kitchen was a small, close-knit community in the 1940s and in 1961 residential leases were prepared for all the residents. 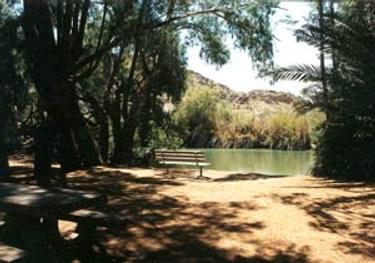 The leases were terminated in 1983 by the BLM after the 1983 flood of the Colorado River did extensive damage to all the buildings. There is one small adobe-type house still standing about a half-mile west of Betty's Kitchen. It was constructed in the early 1940s of adobe, arrowweed, and telephone pole segments.

Betty's Kitchen is a very important part of our community because of its close proximity to Yuma. Betty's Kitchen is only 15 miles northeast of Yuma and local residents are able to enjoy the area without having to spend all day traveling to the location. It is also a favorite field trip destination for the local schools because it is so close to town. A Betty's Kitchen Watchable Wildlife and Interpretive Area Teacher's Guide is also available for teachers to prepare the students for their visit and also provides additional learning tools for use in the classroom.